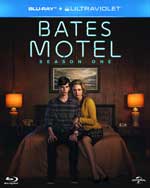 Bates Motel is a prequel to Psycho, but it smartly ensures it can’t be too directly compared to the 1960 classic as it’s set in the modern world, although a slightly heightened world where everyone looks like they could have just fallen out of the 1950s. It also makes sure it pays homage to its source in both its setting (the motel and house are an exact replica of the original) and central characters, while doing enough to strike out on its own so you’re not just wishing years would pass and Marion Crane would to turn up at Norman’s motel. END_OF_DOCUMENT_TOKEN_TO_BE_REPLACED