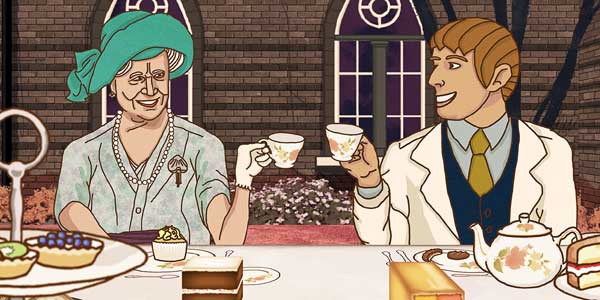 The synopsis: in 1989 Chapman – ‘a freeloading bastard’ (according to John Cleese at his funeral) sadly ceased to be! ‘E’s expired and gone to meet ‘is maker! ‘E’s kicked the bucket, ‘E’s shuffled off ‘is mortal coil, run down the curtain and joined the bleedin’ choir invisible!! – OK enough Parrot Sketch quotes already!! (which he co-wrote with John Cleese) END_OF_DOCUMENT_TOKEN_TO_BE_REPLACED

After Graham Chapman’s death in 1989, the surviving members of Monty Python haven’t done all that much that’s involved all of them, however John Cleese, Terry Gilliam, Eric Idle, Terry Jones, and Michael Palin are reteaming for a new project.

Variety reports that Jones is working on a new live-action/CG comedy called Absolutely Anything, and while we won’t get to see the Pythons on screen, we will hear their voices. They’re set to play ‘a group of aliens who endow an earthling with the power to do “absolutely anything” to see what a mess he’ll make of things.’

Jones hasn’t directed anything since 1996’s The Wind In The Willows, but it appears he’s been working on this new movie (on and off) every since, alongside screenwriter Gavin Scott. All the Pythons have agreed to take part, except for Eric Idle, but it’s said the producers are working on him.

Also onboard is Robin Williams, who’s set to play a talking dog who seems to understand more about the mayhem that ensues than anyone else does. He could also play another role, “a pompous Frenchman reminiscent of Inspector Clouseau.”

Jones says about the movie, “it’s not a Monty Python picture, but it certainly has that sensibility.”