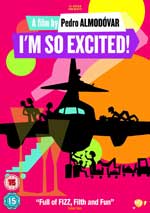 I’m So Excited takes him in a slightly different direction as it’s far simpler, a lot camper and more interested in being pure entertainment than most of his movies. This has disappointed some, who were expecting an ‘Almodovar’ movie, but that doesn’t mean it lacks its own small-scale charms, even if it’s unlikely to amaze many. END_OF_DOCUMENT_TOKEN_TO_BE_REPLACED

The film hits DVD in the UK on August 26th, and to celebrate that we have an interview with Pedro, where he talks about the movie, how it’s a metaphor for modern Spain, and what it was like being gay as a young man in the era of General Franco.

Your new film, which is a great joy to watch and a great joy to experience. It was really great fun. I really enjoyed it.
Yeah, it was very funny to do it. I actually thought that making this film would be a much lighter experience for me than the films I’ve been making. But that was actually silly to think that. It wasn’t like that at all. Why should I ever think that? Because in fact comedy is perhaps one of the most difficult genres of films that you can make because it requires much more precision. It’s much tougher to make. And for me, in fact, that whole process of filming was a process where I had to have eyes on everything. I had to have eyes in the back of my head to watch what was going on, but in fact the film itself was a celebration for all of us.  It was a joy for all of us to make, particularly because it took me back to the tone of the first films that I made when I started off my career: The comedies. END_OF_DOCUMENT_TOKEN_TO_BE_REPLACED

Just when Pedro Almodovar earned himself a new audience with the brilliantly bonkers Skin I Live In, he follows it up with a film that at best can be described Almodovar-lite. It’s charming enough and at times well-acted, but ultimately too paper-thin to be remembered along with his great works.

If he is the high priest of camp then it was only a matter of time before he made a film set on a plane, with three stewards as his main characters. And very funny they are, although their constant bitching and fussing about who is bisexual and who has slept with who gets tiresome over the 90 long minutes. Even their singing of the title song by the Pointer Sisters wears a bit thin after 30 seconds. END_OF_DOCUMENT_TOKEN_TO_BE_REPLACED

Pedro Almodovar returns soon with I’m So Exited, which looks like it’s going to be his gayest and campest movie in a very long time. Now Total Film has debuted a new UK trailer for the movie, which shows us plenty of very gay aeroplane shenanigans, as well as Penelope Cruz and Antonio Banderas’ working on the ground for their cameo appearances.

A UK release date of May 3rd is currently set, with the US getting it in June.

Pedro Almodovar is back soon with what looks like it’s going to be his gayest and campest movie in a long time – I’m So Exited. Now a new Spanish teaser trailer has arrived, which gives us a glimpse of Penelope Cruz and Antonio Banderas’ cameos.

A UK release date of May 3rd is currently set.