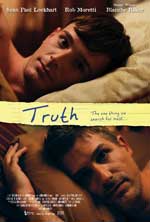 Caleb meets Jeremy (Rob Moretti) on the internet, and despite his uncertainty, the two have soon fallen head over heels for one another. Caleb is reluctant to trust anyone, feeling everyone he’s ever cared about has ended up abandoning him, but slowly he allows Jeremy in, who is keen to tell Caleb he will always be there for him. However when Caleb discovers Jeremy has been keeping major secrets, things soon unravel in very dangerous ways – indeed we know from very early on in the movie that Caleb has been locked up and something very serious has happened between him and Jeremy. END_OF_DOCUMENT_TOKEN_TO_BE_REPLACED