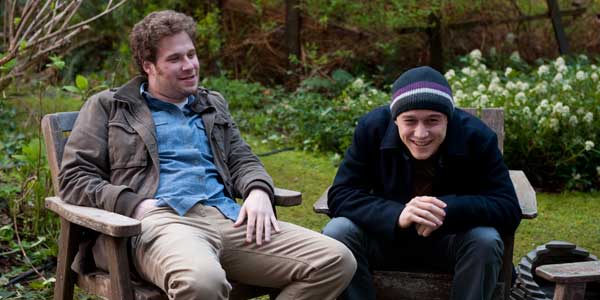 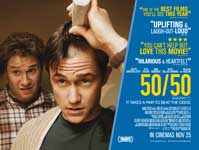 It’s a real shame, as a lot of people will undoubtedly miss out. It doesn’t really matter what I or anyone else says – a movie about cancer sounds like a bummer, and so getting people through the door is gonna be tough. The film undoubtedly suffered this problem in the US, where it got glowing reviews but stalled at $34 million at the box office.  If it had been this funny and was about a non-serious disease that makes people fart, it would have undoubtedly made hundreds of millions.

The film is loosely based on the experiences of Ali G producer Will Reiser, who was diagnosed with cancer when he was in his early 20s. He was convinced to write a screenplay about it (although with significant changes made compared to real life) by his friend, Seth Rogen, with the result that the Knocked Up actor stars in the film as a fictionalised version of himself.

Joseph Gordon-Levitt takes on the lead role of Adam, a radio show writer whose back pains turn out not to be a spasm but a rare form of cancer that only has a 50/50 survival rate. After the initial shock, Adam tries to find a way to carry on. Initially he thinks his rock through the ordeal will be his girlfriend, Rachael (Bryce Dallas Howard), but while she’s quick to say she’ll see him through his illness, the reality of dealing with cancer may be more than she can handle.

That leaves his best friend Kyle (Seth Rogen), whose heart is in the right place but his mental maturity may not be. There’s also his mother (Anjelica Huston), who’s rather highly strung and already has a husband with dementia to deal with.

As Adam starts chemotherapy, he meets new cancer-stricken friends and also finds out unexpected things about those around him. To help him through all this is therapist Katherine (Anna Kendrick), who desperately wants to make things right, but Adam is only her third patient and she’s not great at negotiating the boundaries between doctor and patient.

What that synopsis doesn’t get across is that 50/50 is really, really funny. It’s one of the few films this year that has literally made me laugh out loud and had the cinema audience I was watching the movie with in stitches. Best of all is that it never does this with cheap laughs. The humour is organic, with the characters finding things to smile about in the situations they’re faced with, no matter how seemingly grim. The script, which was written by Will Reiser with help from Seth Rogen, is great, not so much because you know it comes from personal experience, but because it expertly balances the harsh realities with the humour, and the levity with the emotionally moving.

Director Jonathan Levine also does sterling work, concentrating on bringing us close to the characters, so that when you’re laughing, you’re also coming to care about the people involved, and not just because one of them has cancer. Of course, none of this would work without some good acting. Originally James McAvoy was cast in the lead role, but it’s difficult to imagine him being any better than Gordon-Levitt, who is absolutely pitch-perfect as Adam. I doubt he’ll get an Oscar nomination just because of the way these things work, but he deserves one. It’s a remarkable performance that is funny, wry, clever and emotionally affecting all at once.

Seth Rogen is very good too, even if he essentially just puts on the usual Seth Rogen show, but with a bit more pathos behind it this time. It’s also an increasingly rare chance for Anjelica Huston to show just how good she can be, playing Adam’s mother. Her screen time is pretty short, but she certainly makes her mark.

Anna Kendrick and Bryce Dallas Howard do good work as the women in Adam’s life, although as with so many things Seth Rogen has had a hand in, the female characters are far flatter than the males. Rogen has a rare talent for bringing out the power of the bromance (which is one of this films’ great strengths), but in films he’s been more than just an actor in, younger female characters always seem to come across as a means to an end rather than fully fleshed out people.

And quite frankly, if I was Bryce Dallas Howard I’d be getting a bit paranoid, as after this, Eclipse and The Help, I’d be worried everyone thinks I’m just a complete bitch.

If the film has one weakness, it’s a slightly repetitive tendency to say things are more complex than they initially appear, and to do it in a slightly cheesy way (e.g. Seth Rogen is an ass because he just wants to shag women, but then we’re supposed to realise he’s actually brilliant because he’s secretly reading a book about cancer). It does help illuminate Adam’s journey to realise that while it’s his illness, he’s not alone, but it’s just a shame it’s not handled as well as the rest of the script. It’s not much as a problem though. Indeed, it almost feels mean to quibble about it.

I know that for a lot of you, no matter what I say, 50-50 is going to be a tough sell just because of the subject matter. Audiences have proven over and over again that the only person they want to see die of cancer is Debra Winger in Terms Of Endearment, and quite frankly with a lot of the mawkish, movie-of-the-week style disease films we’ve had in the past three decades, it’s not surprising people feel like they’ve been burned too many times to give another one a chance, but with 50-50 your really should. It may be about cancer, but the main thing you’ll remember as you leave the cinema is how moved you’ve been and how much you’ve laughed.

Overall Verdict: It is indeed the funniest film about possibly dying of cancer you’ll see all year, and I mean that as much higher praise than it might sound.