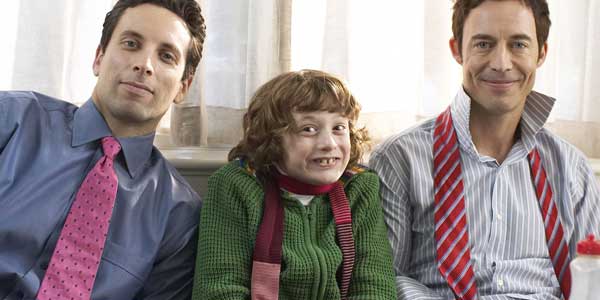 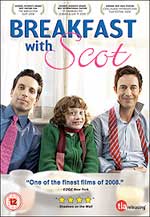 After 11-year-old Scot’s mother dies of an overdose, he’s sent to live with gay couple Eric and Sam until his new guardian (Sam’s brother) comes to pick him up. Closeted ex-ice hockey star Eric isn’t entirely sure what to do with this interloper into his well-ordered life, especially as the kid’s love of musicals and feather boas means he seems ‘gayer’ than either of the men looking after him. Slowly Eric has to come to terms with having a kid in his life, while Scot starts to change in order to fit with Eric’s more typically manly idea of how he ought to be acting.

Based on the book of the same name, Breakfast With Scot is a sweet and touching little Canadian movie that plays with gay and straight stereotypes in a gentle yet interesting way. It’s also a relief that the film doesn’t try to beat the viewer over the head with the idea that gay people can be just as good parents as straight people, instead letting the relationships between the characters develop naturally, only occasionally dipping in gentle moralising.

Admittedly the plot itself is more than a little clichéd. It may have gay parents and a camp kid, but story-wise Breakfast With Scot is much like the many other movies where a stuffy control freak has their world turned upside down by the arrival of an adorable kid, but it’s all done in such a simple and sweet way, it’s nevertheless enjoyable.

Although the film’s nothing earth-shattering, Breakfast With Scot is a crowd-pleasing watch with plenty to warm the heart and very good performances from Tom Cavanagh, Ben Shenkman, and young Noah Bernett (who’s far more talented than most child actors, getting to the heart of what he’s saying without overdoing it). Yes, you know exactly how it’s going to end about 10 minutes into the movie (right down to the setting the finale will take place against), but it never feels forced and Bernett is superb, giving the whole film far more heart and life than it’d otherwise have.

Overall Verdict: Although rather clichéd, Breakfast With Scot is a sweet movie that warms the heart.