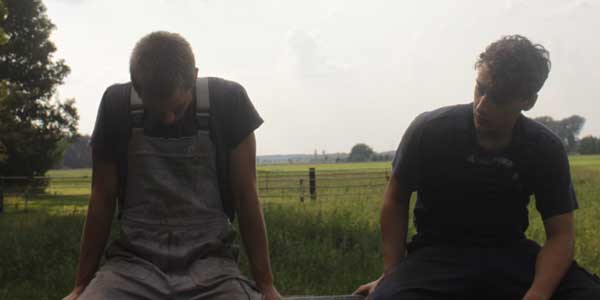 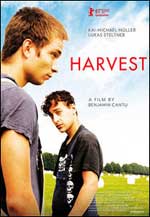 As the gay son of a farmer, Harvest is a movie that should have spoken to me – or at least if it was going to speak to anyone, it should have been me. Sadly though it didn’t.

The film is set on a large industrial farming operation on the very edge of Berlin. The farm takes in interns who learn the ropes and do exams to become fully qualified farmers (and yes, whilst not compulsory, you can indeed take exams to be a farmer – in fact you can take entire degrees in it). Jakob (Lukas Steltner) is one of the interns and while the bosses are happy with his work (despite the fact he spend a lot of time slacking off), he’s struggling with his studies.

Marko (Kai-Michael Müller) comes onto the farm as a new intern, having decided he’d prefer agriculture to banking. As Marko learns about farming, he also sparks up a friendship with Jakob, which eventually leads to something more and a potential relationship.

Director Benjamin Bantu has described the film as a documentary, but it isn’t really. The two main characters are played by actors, although they appear to have improvised most of the scenes. However everyone else in the film is a non-actor, most of them just playing themselves as they go about their farming lives. Although it’s an interesting idea, it doesn’t really work as Bantu finds very little of interest to film.

Harvest’s attempts at realism feels painfully forced. While many films equate endless overwrought misery with reality, Harvest goes completely the other direction and concentrates on not much happening quite slowly. To a certain extent that is more real, but it doesn’t mean it’s interesting to watch. It might have actually worked if its other attempts to make it seem more like real life didn’t come across as so contrived. The film follows the rather annoying tendency of some indie films to have the main characters mumble at one another in disjointed sentences.

It’s presumably meant to show the communication difficulties of two (presumably) closeted, not particularly well educated people who don’t know each other well, but it doesn’t feel real. People simply don’t talk like that, and if they did, they wouldn’t start a relationship, they’d just assume the other was the most boring person they’d ever met.

As so often with movies that try to be ‘real’, Harvest ends up seeming more contrived than if it had just told the story normally. Worse than that, it’s bloody boring. Nothing much happening slowly is not a route that was ever going to make a scintillating watch, but Harvest’s faux cinema verite documentary style further distances the viewer and makes it tough to get anything more than a surface reading of the characters. Ultimately Bantu set himself a tough challenge – it’s possible but difficult to go very deep by showing very little – but sadly he fails to achieve his aims.

It’s difficult not to think that a traditional documentary could have got more out of the potentially interesting setting than Harvest does – even if it’s unlikely it would have had any gay aspects to it. Many of the interns seem to be young men who’ve rather lost their way in life and the farm is giving them a strength of structure, discipline and purpose (in an oddly similar way to the military). However Harvest keeps this on the edge while focussing on its two rather tedious, verbally challenged leads, who are less interesting than the world around them.

Overall Verdict: Harvest has the potential to be something special, but its attempts to be ‘real’ just result in it seeming contrived and making it far duller than it needed to be.