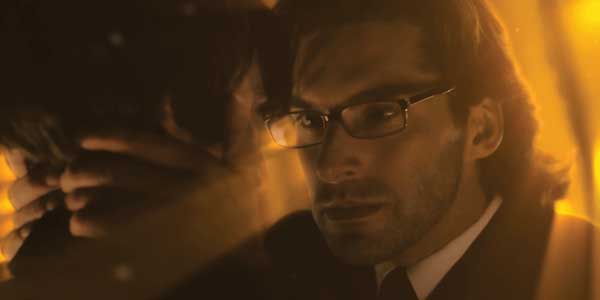 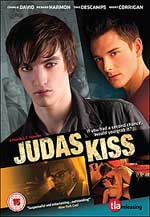 Charlie David plays Zachary, a man who after a decade trying to make it as a film director and only managing to get a reputation as the best partyer in town, is now aimless and rather bitter. He reluctantly agrees to fill in as a judge for a film competition at the university he dropped out of years before. His first night back at his alma mater, he meets and sleeps with a young man (Daniel Harmon), only to discover the next day that the kid is one of the competitors he’s meant to judge.

That’s only the beginning of the strangeness, as the student claims to be called Daniel Reyes and that he’s entering a film called ‘Judas Kiss’ into the competition. Zach is convinced someone is playing games with him, as Daniel Reyes is his birthname, and it was his short, ‘Judas Kiss’, winning the competition years before that caused him to drop out of university and head for the bright lights (and disappointments) of LA. However it quickly becomes apparent that this isn’t a game, and that Zachary has somehow stumbled into a situation where he gets to judge the competition that changed his life over a decade before.

It’s a bit of a weird set-up to be honest, and it would have helped if the film could have set out the rules it was playing by a bit more clearly. Is it Back To The Future rules? Terminator rules? Twelve Monkeys rules? Indeed, has Zachary actually time-travelled or is the film competition some sort of peculiar nexus that exists at various points in time simultaneously? It becomes particularly pressing when Zachary realises he has a choice over whether to allow Judas Kiss to win or not. Logically if his past self doesn’t win, he doesn’t go to LA and therefore the last decade would never have happened. For a lot of the film it seems as if he’s basically got a chance to correct past mistakes and give his young self another chance, but in the end there doesn’t seem to be any sort of logical path the film’s been following. People have learned lessons, but everything we’ve seen was essentially pretty pointless.

Despite this, Judas Kiss is a fairly watchable flick, with a few interesting ideas about life and the choices we make. Ignoring the sci-fi aspects it’s actually a pretty interesting little movie, and the premise of someone being able to look back on the mistakes they made as a youth is certainly a good one. It would just be nice if things made a little bit more sense.

Judas Kiss also features two people at the top of the gay movies game – although from very different ends of the spectrum. There’s Charlie David, who’d be on the queer cinema A-list (if there was such a thing) following the likes of Dante’s Cover, Mulligans and Kiss The Bride.

Overall Verdict: A potentially interest little gay sci-fi/drama that undermines itself constantly by refusing to bend to any sort of logic.