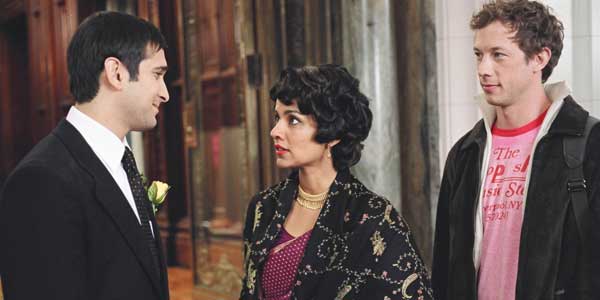 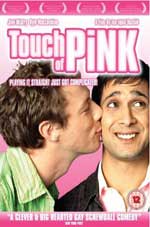 Gay, Canadian, Muslim Alim is living in London with his boyfriend, happy to be far away from the expectations of his Islami mother and family. When mum Nuru comes to visit, Alim tries to hide his relationship, but that proves tougher than he thought.

Gay movies are a strange breed, largely because they often try so hard to be resolutely ‘GAY’, that the end result is that nobody, gay or straight, can identify with what they’re seeing (it’s also true that a lot are made by people who shouldn’t have progressed beyond shooting holiday videos). A Touch Of Pink on the other hand is a movie that aims its sensibilities at anyone with a vaguely open mind and is all the better for it.

It’s slightly camp and takes its cues from the old style Hollywood screwball comedies, even to the point of having the spirit of Cary Grant, played by a surprisingly effective Kyle McLachlan, handing Alim advice. It is essentially a straightforward romantic comedy, with most of the conflict coming from the ethnic, social and generational differences between Alim’s attitudes and that of his family. This is helped tremendously by Suleka Mathew, who puts in a tremendous performance as Alim’s mother, who has to come to terms with the fact she won’t be having grandchildren.

The result is a film that ticks along nicely and has some very funny moments, but which never comes truly alive, partly because there’s a sense of the plot feeling the need to tick all the expected boxes. What’s a real shame is that there aren’t any special features, not even scene selection (although the movie itself is broken into chapters). Perhaps there weren’t many extras available for this low budget affair, but even so it feels like a waste.