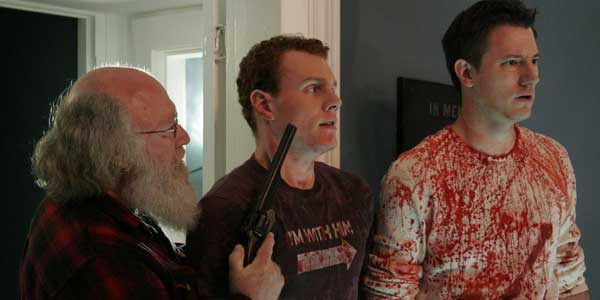 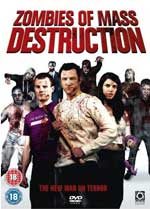 While some have compared it to Sean Of The Dead, that would be being a bit generous, other than the fact it’s a horror movie that’s also a comedy. More accurate description is its US tagline, ‘A political zomedy’. The set-up is pretty basic. Port Gamble is an idyllic small town where the locals are going about their humdrum lives when the whole place is taken over by the undead.  As usual a small band of the uninfected has to try to survive.

What makes this slightly unusual is that the main characters are a young Iranian-American, Frida, and gay couple, Tom and Lance, who are only in town so one of them can come out to his mother. However when Frida’s boyfriend get his face ripped off as they sit talking in a car, and Tom’s mom turns into a zombie just as he’s about to reveal his big news, it turns into an all-out fight for survival.

The movie has some fun satirical ideas to add to the basic recipe, such as civilisation having to be defended by gays and those of middle-eastern extraction, along with a peacenik hippie teacher who eventually decides perhaps there are situations where guns are necessary. Indeed, the smartest and most intense bits of the film are when Frida is locked up by a Canadian who thinks that despite his family being immigrants too, the Iranian-American girl must be a Muslim terrorist responsible for the zombie outbreak. Slightly less successful, but still fun, is Tom and Lance holing up in a church, run by a pastor who believes he can cure homosexuality, and that the people who have turned into zombies are being judged by God for being pro-choice, getting divorced or supporting gay marriage. Also fairly impressive are the zombie makeup and effects, especially considering the movie was obviously made for next to nothing.

However like many no budget movies, a lot of good work keeps getting undermined by an occasional tendency towards amateurishness. Some of the jokes, particularly in the early stages, are just cheesy, obvious and a little pathetic. Likewise, while most of the acting is better than might be expected, a few people in the movie seem to think they’re in an am-dram panto. It means that while the film has some interesting ideas, it sometimes come across as slightly confused, and it’s often difficult to work out whether it really wants to make a statement, or if it wants to be taken as silly nonsense (it does get pretty ridiculous at times).

There are also times where the editing is rather bizarre, as if they got around to cutting the movie together and realised they were missing several important shots, and then had to cover it up. It’s worth mentioning the slightly odd epilogue as well, which was obviously filmed at a different time to the rest of the movie and on better quality cameras. It does slightly stick out and much of it feels unnecessary, but the final shots actually work as an interesting counterpoint to the usual horror movie shock ending, suggesting that if there is a point to the film, it’s that another zombie attack isn’t the real monster we should beware of.

To a certain extent, it would be wrong to take the film to task too much for its amateurish edges, as it undoubtedly does a lot with a very little and far outpaces most cheap zombie flicks in terms of both the quality of its gore and its ideas. So many low budget zombie movies come across as if a cast and crew, who have no idea what they’re doing, went on a filmmaking bender and are subjecting unsuspecting audiences to the results. Zombies Of Mass Destruction, on the other hand, is a lot more fun than most, genuinely tries (and often succeeds) at offering an amusing social commentary, and certainly provides plenty of gore.

The only features are a trailer and a very short but fairly interesting making of featurette.

Overall Verdict: A fun horror-comedy, that may have some cheesy edges, but offers more than enough humour, gore and gore to make it stand out from the usual no-budget undead flick.