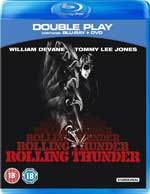 Now it’s arrived in the UK in a new Blu-ray & DVD release, and we can finally get to see what the fuss is about. The movie is essentially a revenge thriller, but one that’s more grounded and morally complex than most entries in the genre. The film opens with Major Charles Rane (William Devane) arriving back in the US, after years being tortured in a North Vietnamese prison. While he has hopes of rebuilding his life, he discovers his wife has taken up with another man and his son doesn’t remember him.

To commemorate his return, Rane is given a silver dollar for every day he’s been away (over 2,000 of them) by a local store, which attracts the attention of a bunch of hoods. They torture Rane to try and find out the location of the money. During the attack Rane loses a hand and his wife and child lose their lives. While the military man later claims he can’t remember who attacked him, he knows exactly who it was, and so he sets off with a young woman called Linda (Linda Hayne) to find them, eventually hooking up with his old war buddy Johnny (Tommy Lee Jones) for a final showdown.

William Goldman alleged in his book Adventures In The Screen Trade that Rolling Thunder had “the most violent sneak reaction of recent years… the audience actually got up and tried to physically abuse the studio personnel present among them.” 20th Century Fox meanwhile is said to have dropped the movie after it was made because they were so disturbed by the violence. Nowadays though, while still violent, it’s not nearly as shocking as it seems to have been for late 70s audiences.

To be honest, in terms of actual gore it’s not that bad (although it has its moments), it’s more that the film takes time to emotionally engage the viewer, and it knows how to make the revenge action seem visceral. The things that’ll make you cringe take place off screen, and your imagination does a good job of filling in the blanks.

Co-written by Paul ‘Taxi Driver’ Schrader, it’s a movie that’s a step above most revenge flick. Post-Death Wish, the genre became essentially about a fantasy of revenge. By making it somewhat unreal, these films got around the moral quagmire they might otherwise fall into. Rolling Thunder is more interesting and complex, as while the bad guys are definitely bad, the good guys are driven by difficult motivations. Rane, for example, is no saint. He’s a quiet, damaged man, with his actions driven as much by his time in Vietnam is what happened when he got back.

While there aren’t that many special features, there’s an interesting interview about the movie with actress Linda Haynes, as well as an audio commentary with co-writer Heywood Gould. As you might expect for a movie from 1977, it’s not a crystal clear Blu-ray transfer, but it is pretty good. While there are occasional issues with grain, for the most part it doesn’t look too bad at all.

Overall Verdict: Rolling Thunder is what I’ve always thought a revenge film should be – a movie that makes you uneasy about what’s going on and why, even while you understand it.