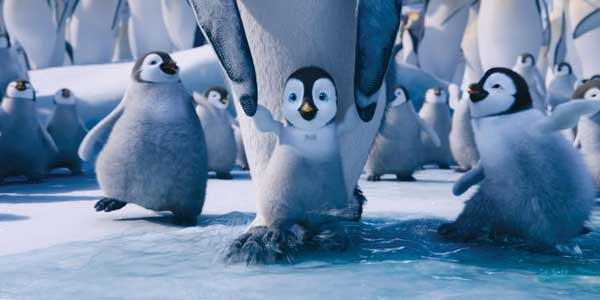 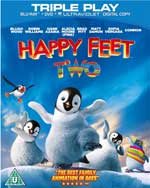 Mumble (Elijah Wood) is now grown up – although rather inexplicably still looks like an overgrown juvenile penguin – and has a chick of his own, Erik, a rather strong-willed youngster who unlike his father, isn’t that good at dancing, and hasn’t shown a huge amount of aptitude for anything else either, barring having a temper and getting into trouble.

Erik runs away and encounters something to inspire him – The Mighty Sven – a penguin that can fly! With Mumble hot on the heels of his runaway son, he takes his wayward child back home but discovers that during their absence, climate changes have caused a bit of a disaster in Emperor Penguin-land, and everyone but them is now trapped in a deep chasm, with no way to get out. The only way to save the Emperor race may be to bring all the penguin kingdoms together and get some other species to co-operate too.

A lot of the film is completely nuts and the ending, which seems to suggest you can literally move mountains as long as you dance enough, is completely insane, but the movie prizes heart above logic, and manages to tug at your heartstrings even while your brain is telling you what you’re watching is a tad stupid.

Just like the first movie, the film has plenty of surprisingly epic and rip-roaring song and dance numbers. I don’t know what it is, but there’s something about penguins dancing that’s oddly hypnotic and exhilarating. And if you want your kids to get some culture, the movie even features a song to the tune of an aria from Puccini’s Tosca!

A fun new addition to the film are Bill and Will the Krill, voiced by Brad Pitt and Matt Damon (both of whom probably signed up to get bonus points with their kids). They initially seem like they’re going to be Happy Feet’s version of Ice Age’s annoying Scrat, but they actually have a rather sweet story of their own, with plenty of messages about finding yourself as an individual, friendship and that even the smallest of things can have a big effect.

Fox News recently criticised Dr. Seuss’ The Lorax and Arrietty, saying they were part of a liberal agenda to brainwash kids into being environmentalist who believe in green energy policies. Goodness knows what the rather conservative, right wing news network made of Happy Feet Two, which not only wears its environmental colours on its sleeve, but also features potentially gay krill!

Happy Feet Two is a very strange film, but it’s a very charming one, and like the first film, it looks absolutely gorgeous. The company behind the film, which also worked on Legend Of The Guardians, is probably second only to Pixar for the beauty of the images it produces. Happy Feet Two really is a gorgeous movie to look at, and there’s no doubt the Blu-ray brings that out to the full. The picture quality is absolutely pristine, with an incredibly broad colour palette that shows off the beauty of the CG Antarctic vistas magnificently. From the sheen on the penguins’ coats to puffs of snow that come off their feet as they dance, it’s wonderfully animated and superb to look at in HD.

The disc also come with a decent selection of features, most of which are incredibly family-friendly, including a featurette that’ll teach you how to draw a penguin, a look at real penguins and some behind-the-scenes bits and pieces that’ll be interesting for kids and adults. If you’ve got an iPad or iPhone, you can also download an App that allows your device to act as an interactive second screen whilst watching the movie. Also worth checking out is a brand new, CG Looney Tunes cartoon, bringing Sylvester & Tweety-pie into the 21st Century but happily retaining the voice of Mel Blanc, who manages to voice the main characters despite being dead for 23 years.

Overall Verdict: Objectively, Happy Feet Two is a strange, rather ridiculous film that shouldn’t work, but like its predecessor, thanks to beautiful animation and huge amounts of heart, it’s a real family treat.