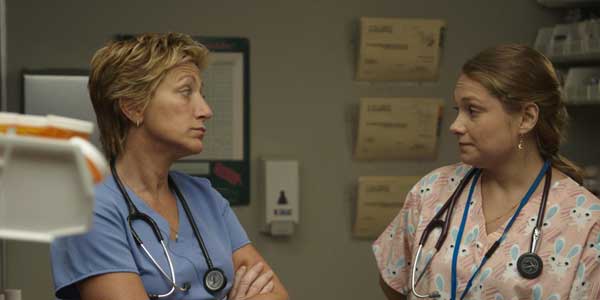 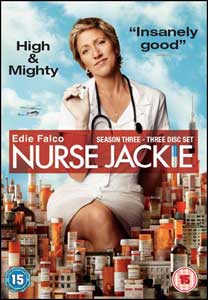 It seems to be the current law of US cable TV shows, that the main character has to be empathetic  but a bit of a bastard. Whether it’s Dexter, True Blood, Boardwalk Empire or pretty much anything else HBO or Showtime is putting out, love ‘em hate ‘em protagonists are the order of the day. That’s certainly true of Nurse Jackie, who’s loved by her colleagues, is great for the patients, but is also busy popping pills left, right and centre and will do anything to keep getting her fix.

Season 3 sees pressure coming down on Jackie to quit, with rumours reaching HR that someone in the hospital ER is abusing drugs, as well as increasing tension between Jackie and her husband. He desperately wants to believe she’s kicking the pills, which leads to lies upon lies and the cracks growing ever larger.

It’s difficult not to feel sometimes that Nurse Jackie is a slight case of the Emperor’s New Clothes, as while there’s a lot of incident there’s not as much going on under the surface as there initially appears to be. However it is very entertaining, with plenty of humour (much of it provided by Peter Facinelli, playing a very different character from Twilight’s Carlisle Cullen) and some fantastic performances. Indeed, it’s thanks to Edie Falco as Jackie that the whole thing doesn’t fall on its ass. Her character is actually fairly unpleasant at times, but its thanks to Falco’s charm and depth that it works. Indeed she’s so good that the series puts the viewer in the odd position of willing Jackie to get her fix, which is an odd moral position to be in.

The set includes 12 punchy half-hour episodes, that are certainly a pleasure to watch, even if it would be nice if the series could go a little deeper into the situations it presents.

Overall Verdict: Thanks to some superb acting, a series about a potentially unpleasant character becomes very entertaining and funny.