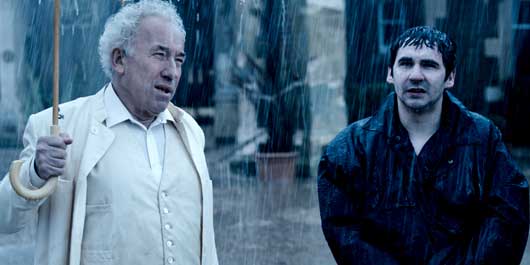 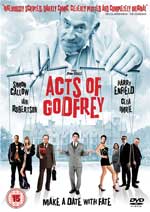 However what really marks it out isn’t its penchant for car park nudity but that the whole thing is written and performed in rhyming couplets. Indeed you get the impression that it was the chance to make a film in modern verse that attracted the likes of Simon Callow, Harry Enfield, Celia Imrie and Doon Mackichan.

The plot sees a man called Vic (Iain Robertson) heading to a hotel for a course that’s supposedly going to help him ‘Win! Only Win!’, as his boss feels his moral compass is standing in the way of making profits. Once there he meets up with a varied group of characters, ranging from a couple of underworld heavies to a middle-aged confidence man (Harry Enfield). Also at the hotel is Simon Callow as Godfrey, a god/fate figure who decides to step in and push the characters in particular directions. Most notably he wants the upright and moral Vic to get together with the unprincipled and predatory Mary (Mifanwy Waring).

Making a movie in rhyming couplets is a fascinating idea, but unfortunately it doesn’t completely work. A lot of it is admittedly clever, but in order to get things to rhyme it has a tendency towards tortuous sentences and making people say unnecessary things. Many have suggested Acts Of Godfrey is like modern day Shakespeare, but the script could perhaps have done with paying a little more attention to the bard, who didn’t feel the need to constantly rhyme and realised that the verse should help give the story rhythm without overpowering it. While Acts Of Godfrey’s verse works extremely well about 80% of the time, because it’s a rather contrived form, when a rhyme is ugly or a sentence twisted, it has a tendency to overwhelm everything else.

However with a fun plot, lots of neat little vignettes looking into the background of the characters and a visual style that’s bright and bold, Acts Of Godfrey is generally quite entertaining. It’s certainly unusual and even the things that don’t quite work get an A for effort. That said, it’s slightly difficult to escape the sense that this is as much a calling card for first time writer/director Johnny Daukes as an enjoyable film in its own right. He certainly shows that he’s a talent to look out for but as with the rhyming couplets, there are moments where his attempts to show off some filmic skill and an unusual take on its subject overpower the movie. There’s also a slight tendency towards pessimism for its own sake, where ultimately everyone and everything is flawed and corrupt, including God.

The performances are good though, with Harry Enfield having great fun as a villainous cad and Iain Robertson providing a great central core to the film as the down-to-Earth Vic, around whose simple attempts to be a decent person swirl the film’s more outlandish characters. And having Simon Callow as God is an extremely smart idea, as he’s one of the few people who can talk in rhyming verse while sound the same as when he’s just talking completely naturally.

Overall Verdict: Acts Of Godfrey is a film that ultimately succeeds as much as it fails – often simultaneously. For example the rhyming couplets are both a great strength and an occasional Achilles heel, but it’s still fun and entertaining, and a fascinating debut for a filmmaker who could go on to great things.