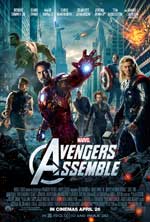 It’s an action packed, rip-roaring juggernaut of a film, which pulls off the impressive trick of perfectly balancing a large ensemble cast, so that it feels as if everyone is there for a reason and has their own character arc.

My only issue is that, well, it’s not gay enough. I don’t mean that I expected Thor and Captain America to being making out by the finale (quite frankly if Chris Evans is going to snog any guy, I’d prefer it to be me), it’s just that all the movies leading up to Avengers had a slight sense of camp to them, which is absent here. It would have been awful if we’d gone back to the days of Joel Schumacher’s S&M Batman movies, but I did kind of miss the self-knowing winks of what had led us here.

They haven’t completely de-gayed the movie. After all, when you have a villain like Loki (Tom Hiddleston, who seems to get sexier every time I see him) who likes to ponce around wearing leather and a horned helmet, he could either be planning to take over the world or getting fabulous for a gay fancy dress ball – or maybe even both! However it’s actually Agent Coulson (Clark Gregg) who really brings the gay, as he spends much of the movie crushing on Captain America something fierce. The Cap doesn’t reciprocate of course, presumably because he’s from the 1940s, when the only gay people on the planet were Noel Coward and Quentin Crisp.

All the way through the films that ran up to Avengers I’d had my suspicions about Agent Coulson, and while he’s not a definite homo, I might put a small wager on it. At one point Tony Stark says about Coulson’s relationships, ‘I think there was a cellist’, which for all I know could be American slang for bum boy. By the end of the movie I had a theory that if S.H.I.E.L.D had spent less time preparing for war and had just sent Loki and Agent Coulson off on a date together, perhaps a lot of trouble could have been averted.

I doubt it though, as Loki is pretty nuts and comes to Earth to get the tesseract (the unlimited power source cube that acted as the McGuffin in Captain America) and subjugate the population. While I always prefer films that have a villain who makes some sort of logical sense, Loki is more of the mouth-frothing ‘I deserve to be worshipped puny humans’ type, who’s made a deal to use the tesseract to bring an alien army to Earth, which will help him control the planet.

As you might expect, the people of Earth (and as this is Hollywood, Earth = America) don’t like that idea and so Nick Fury (Samuel L. Jackson) resurrects the stalled Avengers Initiative, which is a plan to bring together the planet’s mightiest heroes to go into battle together. Word is sent out to the likes of Captain America, Iron Man, Black Widow and even Bruce Banner (now in the form of Mark Ruffalo, who’s a better Banner than either Eric Bana or Ed Norton) to help out. Of course with Loki involved, it’s not too long until his brother Thor turns up, determined to put a stop to his sibling’s shenanigans. Ace archer Hawkeye (Jeremy Renner) would also be part of this mash-up if Loki hadn’t used some sort of mind control thing to turn him evil!

The Avengers don’t immediately take to one another as a team, leading to a lot of bickering, clashing egos and fighting. Indeed this would have been a good opportunity for Joss Whedon to add in a bit of camp, as the initial dick-measuring antics of the Avengers are essentially a huge diva-off, but in Whedon’s script there’s simply too much testosterone flying around for any of that.

Can the superheroes put their differences aside and come together to save the planet? Will vast amounts of Manhattan real estate be levelled in spectacular style to ensure audiences feel like they’ve got more than enough bang for their buck? Will I swoon every time Chris Evans does one of his trademark intense looks just above and to the side of the screen? The answer to all of those is, of course, yes.

It’s all great fun, with some huge and very well constructed action set-pieces. Indeed some of the sequences are so massive that I was wondering how the budget hadn’t exploded. Then I realised that setting the finale in New York allows the last 30 minutes to be a long parade of product placement ads, to the point that it’s essentially ‘This building collapse is brought to you by Farmers Insurance’. It’s not actually that distracting, but they sure cram a lot of high-paying brands in.

Whedon’s script does a great job with the characters, finding great tension in the fact they aren’t really a team, but might be able to become one if pushed. Evans, Hemsworth, Downey Jr., Johansson, Renner and Ruffalo all do a great job, with nobody pulling focus or disappearing into the background. Whedon has said it was Captain America who drew him into making the movie, but the Cap’s no more the lead than anyone else. Indeed, probably the most fun character journey is Bruce Banner, who gets several of the movie’s best moments, including a brilliantly violent but deserved response to Loki’s megalomaniacal bluster.

To be honest, I’m not 100% sure there was actually any point at all to the middle third of the movie, but it hardly matter as it’s all so much fun. It’s undoubtedly not as camp as the movies that led up to it, but that’s not a problem. Well, actually it is. There’s a ridiculous amount of beefcake in the movie, and yet nobody gets their shirt off! What the hell is up with that? But hey, I suppose Joss Whedon can’t direct a movie just to appeal to my prurient tastes, although I’d imagine I’m not the only one who’d have liked to have seen Chris Evans and Chris Hemsworth comparing pecs.

Overall Verdict: Maybe Avengers 2  will be a little bit gayer, but while this is a superhero movie that’s deep in the closet (geeks, just admit it, superheroes are camp – you can deny it as much as you like, but you’re only kidding yourselves) it’s an incredibly entertaining treat.