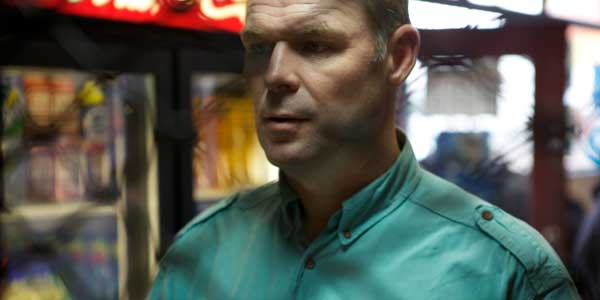 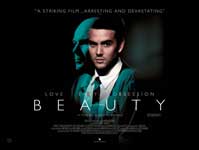 Francois (Deon Lotz) is a middle-aged man living in South Africa. On the surface everything seems perfectly fine, although his marriage seems utterly devoid of any sign of affection. However his life is actually a morass of contradictions, so that he hates gay people, but goes off to retreats to have sex with others men (although actual gays and blacks are banned from these occasions). He seems to have everything pretty much under control though until he meets Christian (Charlie Keegan), the son of a long-lost friend.

His secret interest in the handsome young man gradually turns into an obsession, with Francois following him around at a distance and watching his interactions with various people. Things gradually build to a crescendo, especially after he sees what could be a note of affection between Christian and a male friend.

Beauty is a wonderfully intense character study that looks hard at its subject and asks the audience to really think about what they’re seeing. There are numerous shots just looking at Francois, inviting the viewer to peer into the darkness inside him. It creates a wonderful sense of tension, as at any moment it feels he could either explode into dangerous self-destruction or start to find a way towards some kind of genuine happiness.

It’s a film where you start out with hope for Francois, who’s a rather sad figure, trapped by his inability to see past the strictures thrust upon him growing up in a conservative, white South Africa during Apartheid. The film’s most poignant moments contrast the buttoned down Francois, with the easy freedom of young people, for whom sexuality and race aren’t major issues, something the older man seems incapable of even imagining for himself. Indeed at the film’s most disturbing moment, part of its power isn’t just the brutality of what happens but the almost sweet patheticness of what leads up to it. Francois’ obsession with Christian is at least partly an envy of what his life could have been if he was 20 years younger, which makes the conclusion all the more affecting.

Francois is an wonderful character given impressive life by actor Deon Lotz, who manages to make him both tragic and yet despicable, cruel and yet almost forgivable (up to a point) due to his misguided, blinkered views that seem to be beyond his control. You can understand exactly where he’s coming from, trapped in a prison of his own making. At first it makes him rather sad, until you realise how cruel and dangerous he is and how it poisons all those around him.

It’s a film where one viewing isn’t really enough to get the full measure of the movie, as it’s so rich and asks so many questions of the audience that you need to watch it twice to really let it all in. Director Oliver Hermanus shows himself to be a real talent to watch out for with one of the most powerful movies on gay themes in recent years.

Overall Verdict: Beauty certainly packs a punch with its penetrating, wonderfully acted character study of a man trapped in prison of his own mental making.