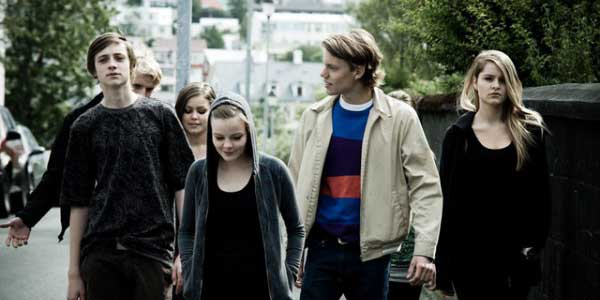 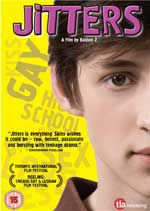 We don’t get to see a lot of Icelandic movies, partly because as a nation of just over 300,000 people, they don’t exactly produce an endless stream of films of international calibre. However Iceland does make a few films each year and every so often something emerges from the country that deserves a wider audience. Jitters is one of them, a kind of Icelandic Skins, centring on a boy coming to terms with being gay, while his friends have their own issues with teenage life.

Rather than Iceland, the opening of the movie takes place in the UK, where young Gabriel (Atli Oskar Fjalarsson) is on a three week trip to Britain. He shares a room with Markus (Haraldur Ari Stefansson) and on the last night they share a kiss. Once back in Iceland, Gabriel hopes there will be more, but Markus treats it very much as if it never happened. We also meets Gabriel’s friends, including his best mate who’s having girl trouble, as well as various other teens who are having issues with their families and battling with the uncertainties of growing up. Gabriel’s family soon notice a change in him and become suspicious, sniffing around to find out what’s going on.

Jitters is an oddly good companion movie to the Belgian film North Sea, Texas, which was released in cinemas in the UK last Friday (April 6th, 2012). While they take very different tacks with their subject, they both follow the first love of a young gay man and manage to strike a balance that feels like it’s getting to some sort of truth about teen life. In Jitters case it’s a messier, more drink and drug-fuelled truth than in North Sea, Texas. In the Icelandic movie, the teens do dumb things, feel every high and low too keenly, take things to excess and get themselves into potentially dangerous situations.

It feels true to the experience of many young people today, and even though my teenage years are long past, I smiled wryly remembering the days of testing the limits of how much alcohol you can drink before you vomit, of still living at home but trying to stake out an existence as an individual apart from your family and lusting after people who I had precious little chance with. Jitters understands the grubbiness and promise of modern teen life, as well as of coming to terms with your sexuality in the current age.

There are moments when it takes things too far and the film tips worryingly close to melodrama, however its episodic nature helps here, constantly dragging the film back to the core of its look at teen life. Icelandic Skins is a good description, except that Jitters has a better line into the truth of teen life and being young and gay, rather than the glorified, OTT hijinks of the Channel 4 series.

Overall Verdict: A film that may get a tad melodramatic at time, but still understands teen life – especially if you’re gay – and the difficulties of trying to find yourself as an individual when you’re a hotpot of confused hormones and emotions.

Special Features:  ‘Behind The Scenes’ Featurette>