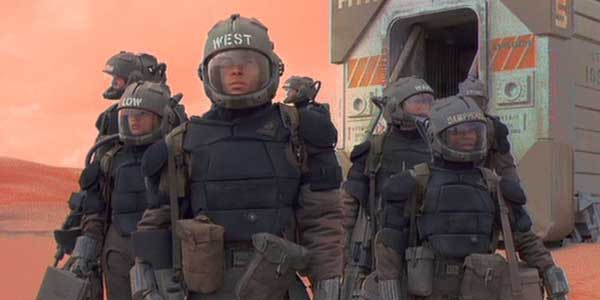 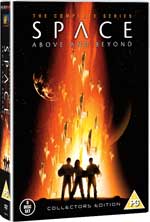 The series focuses on a group of young recruits to the United States Marine Corps Space Aviator Calvary as they head out to battle the aliens – who become known as Chigs – facing their fears as they take on the threat. Space: Above & Below also deals with mankind’s own prejudices, in this case towards in vitroes, who are artificially gestated humans that face intense prejudice from normal people.

Space: Above & Beyond is one of the long lists of TV sci-fi show cancelled before their time. The series got a full season run, but that was it. Luckily though, while not all the loose ends are tied, the makers knew it was unlikely to return after Season 1, so the 22 episodes do have a sense of completeness to them, even if we’ll never fully discover what happened between mankind and the chigs.

Created by James Wong and Glen Morgan after they’d worked on The X-Files but before they created the Final Destination franchise, Space: Above & Beyond is a very entertaining show that probably suffered in the ratings because it takes a few episodes to find its feet. For about the first six instalments it’s almost as if they’re trying out a new tone each week to see which ones work, eventually settling on something that’s as much military character drama as it is sci-fi action.

It handles both sides extremely well, creating a bunch of characters you can’t help but like. Best is Cooper Hawkes, who’s a stereotypical bad boy in the pilot, but becomes far more complex and playful after that, with the series exploring the fact he’s an in-vitro and was ‘born’ at the age of 18, something that presents odd challenges.

The special effects are also worth mentioning. First aired in 1995 and 1996, Space: Above & Beyond was one of the first shows to make extensive use of computer generated FX. Although you might expect this to mean it’s aged badly, it still looks good, with great space battles and a surprisingly gritty feel. It helps make it feel like a show that may be set in space, but is more a war story than anything else.

This release includes a new 40-minute documentary that features retrospective interviews with the cast and crew. Nearly all the main actors and behind-the-scenes figures are involved, giving a fascinating look at the show from its genesis to the reasons they believe it was cancelled. It’s a great addition to the set, although one word of warning – it’s included on Disc 1 but shouldn’t be watched until after you’ve seen all 22 episodes, as it’s spoiler-filled.

The rest of the extras are on the final disc and include a featurette called ‘Design For A Future War’, which includes more retrospective interviews concentrating on the look of the show and how that was created. There are also some interviews done around the time the show was made, a few deleted scenes and a few other bits and pieces, which make a pretty good selection of extras for a show that would have been easy to chuck out on DVD without any features whatsoever.

Overall Verdict: It’s a shame Space: Above & Beyond was killed off so soon, but the 22-episodes we have are an entertaining bunch, which may be rather variable at first, but settles into a very well constructed space-set war series.