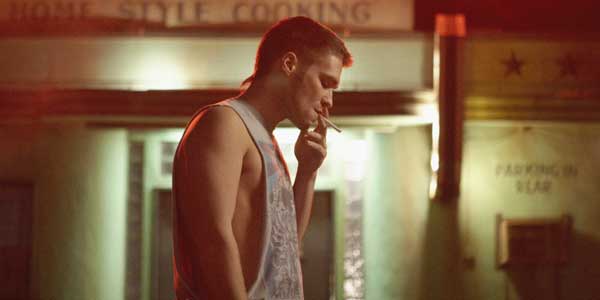 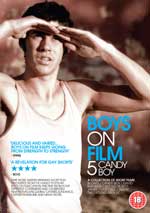 Candy Boy features nine shorts, so take a look at what we think of them below.

Two Young Men, UT (17 mins)
Director: Sam McConnell
As the title suggests, this short is about two young men in Utah. High school student Will is in a gay bar with a fake ID when he’s approached by another young guy, Eli. With Will thinking he’s pulled, they head out into the night, looking for fun and perhaps an illegal rave. As the night wears on, Will discovers that Eli isn’t gay, he’s just the son of the bar owner. However Eli starts to push Will to the edge of his comfort zone, and both boys end up sharing the difficulties of their life. Although the short has a few filmmaking issues where it isn’t clear what’s going on, the writing is strong and the characters are good, ensuring the short pulls you into the story of two people both dealing with different issues surrounding sexuality.
8 out of 10

Sweat (15 mins)
Director: John Lochland
Starring Holby City’s David Paisley, Sweat follows a young man recently out of a relationship who heads to a gay sauna to try something new. While he’s supposed to be broadening his sexual horizons, it’s clear it’s not a place he’s comfortable with, but he nevertheless makes a connection with a couple of the guys there and starts chatting rather than having sex. Although Sweat perhaps doesn’t go as deep into his characters as it could, the short is still an interesting trip into the pressures of being gay in the modern world, where it’s constantly suggested it’s all about sex, but many men are actually looking for something else (even if they’re hoping to use sexual situations to get it). Many people will recognise the uncertainty and resigned hope of the lead character.
7 out of 10

Blokes (15 mins)
Director: Marialy Rivas
The only thing that undermines this very strong film is our woeful lack of knowledge about Chile in the 1980s! Set in a rundown neighbourhood, an adolescent boy is coming to terms with his sexuality, watching the hunky neighbour across the street and trying to get out from under the thumb of his nosy mother. However the forces of dictator Augusto Pinochet launch a crackdown on the neighbourhood, and the youth has no idea that an act of kindness and desire could end up having terrible consequences. I have to admit that as the film didn’t hold my hand, I had to head off to Wikipedia after watching it to find out exactly why the neighbourhood was under attack by the government, but at least it ended up educating me! With a wonderful mix of tension and desire, it’s an uneasy but fascinating look at coming of age under extreme circumstances. Despite the short running time, there are some fascinating moments, such as the boy’s sexual feelings rising even as death and destruction reign down around him. As with some of the best of the Boys On Film shorts, it takes you into a world of gay sexuality that’s far from what most of us know, and shines a fascinating light on it.
8 out of 10

Last Call (18 mins)
Director: Nick Corporon
After being distracted and missing a red light, Gavin is involved in a serious car wreck. He then inexplicably finds himself in a bar. The bartender lines up three shots, which are each a memory of his life – if he can show her he was headed to do the right thing, he will get his life back. The drinks take him back to his relationship with a young man and how early passion was destroyed by alcoholism and a self-destructive attitude. Rather melancholic and bittersweet, Last Call feels as if it has a bit too much to pack into 17 minutes, but it has an awful lot of ideas (some of which it has to be said are a tad cheesy, particularly towards the end).
6 out of 10

Far West (17 mins)
Director: Pascal-Alex Vincent
Erik is used to living the city life where he can express his sexuality openly. However he’s sent to stay with his grandfather, with a couple of his camp friends tagging along. Erik’s granddad doesn’t seem impressed with his ‘soft’ grandson, and merely look at his friends with bemusement. However as time passes both sides show that by opening up there’s more to both of them than meets the eye. While a little bit silly at times and occasionally needlessly oblique (but then, it is French), it can’t hide the film’s relatively simple but strong central message. There is a slight condescension towards rural people though, that the film unfortunately never really deals with.
6 out of 10

James (17 mins)
Director: Connor Clements
A young teen has realised that he’s gay, but already isolated by his parent’s marital troubles and with no real friends, he has no outlet for his feelings. After fleeing from a cottage when a man approaches him, he turns to his teacher for help. James is a sad film, where you can’t help but feel for the title character, especially as his issues are ones many have faced. It also has a serious point to make regarding the isolation many young gay people face, where outlets they would have for virtually any other issue are unavailable or shut down for fear of the repercussions – and here those consequences are potentially serious.
8 out of 10

David (14 mins)
Director: Roberto Fiesco
Young mute man David is wandering the city streets when he sees the slightly older Jose and sits down next to him. Despite the communication problems, David soon signals that he’d like more than just a conversation (where he writes down his side on a pad of paper), and so Jose finds them a hotel room to take things further. Some will undoubtedly have a problem with the film’s neutral viewpoint – is this casual encounter between a teen and an older man a good thing or bad? – but in many ways that’s the film’s strength, in that it allows the viewer to come to their own conclusion, and that irrespective of the moral complications, the encounter is something meaningful to both characters. Sweet and perhaps a tad naïve, David is nevertheless intriguing.
6 out of 10

Candy Boy (13 mins)
Director: Pascal-Alex Vincent
Anime goes gay, and French! Candy Boy is a peculiar short that almost feels like an extended trailer for a movie that was never made, so you’re getting various bits of a story but not the things that tie it all together. Candy Boy is one of the oldest and most trusted youngsters at an orphanage, who starts to investigate when children begin falling ill. His world is shaken up by the arrival of a new boy, who doesn’t play by the rules and believes the problems stem from a mill up the river. The nuns who run the orphanage brutally try to silence him, but as passions rise between Candy Boy and the newcomer, secrets are revealed. Merging a queer sensibility with the idiosyncrasies of anime, Candy Boy is an intriguing yet somewhat perplexing concoction. It’s quite fun and even a little sexy, but the sense you’re only seeing scenes from a much longer tale is palpable and tends to undermine things.
6 out of 10

Go Go Reject (20 mins)
Director: Michael J. Saul
Daniel is a bit of a nerd and not the buffest of guys, but he yearns to be a go go dancer. His friends urge him on, saying he’s a far better dancer than the beefcake who normally parade around in their underpants in clubs. However Daniel soon discovers it’s not your dancing that matters, as he gets rejected from clubs across town for being too skinny. But can he find a way to success? Funny, camp and yet with a point to make, Go Go Reject is a lot of fun, challenging stereotypical ideas about what gay men want and of following your dreams. It’ll leave you with a smile on your face.
7 out of 10

Overall Verdict: An extremely eclectic but interesting selection of shorts, ranging from the fun and silly to the dark and disturbing, and everything in-between. While they’re all very different from one another, it’s surprising how many will leave you thinking.