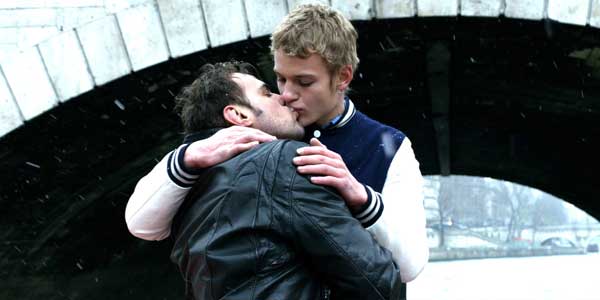 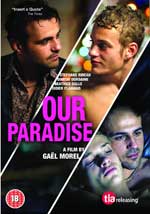 The two spark up a passionate affair, with Vassili and Angelo working together to service clients and often violently rob them. When the heat gets too great, they head out of Paris looking for somewhere to be happy. Soon they begin to see a way to get the comfortable family life they crave, but it can’t be achieved without more violence.

The film is essentially in three parts, starting off in Paris, moving to a smaller town where Vassili and Angelo hook up with an old friend and her kid, and ending in the swanky house of one of Vassili’s first clients. The beginning and end are better than the middle section, but it’s an interesting movie that’s striking, sometimes very sexy, violent and rather dark. Our Paradise does a great job playing with the audience’s affections, as the heroes are also the villains. It makes you hope their love story will succeed, even while everything else about their lives is amoral, dark and grimy.

While love is normally seen in cinema as something that will help lift someone out of a bad life, here it almost becomes the impetus to become worse – the lovers’ aims may be good, but the way they go about things is all kinds of wrong. Vassili and Angelo want to drag themselves out of the gutter, but the older lover in particular isn’t interested in doing it the right way. The real question becomes whether what he does is the only way he could fulfil his dreams, or if no matter what he does, he will innately revert back to violence and degradation.

Our Paradise has issues with uneven pacing and moments where the plot leads the characters rather than the other way around, but it’s well filmed, engaging and sticks in your head after the credits have rolled.  It’s also true that while incredibly good looking, young Angelo is a bit of a blank cipher. It’s a problem as the film hints at Bonnie & Clyde ideas about how two people can come together and do things that go further than either would do alone, but Angelo is presented as someone to be shaped by Vassili and never really goes beyond that. As a result certain motivations are left hanging. However the film still has a dark power even if it has a few flaws.

Overall Verdict: Dark, sexy and haunting, Our Paradise may not be 100% successful, but it’s nevertheless an intriguing watch.