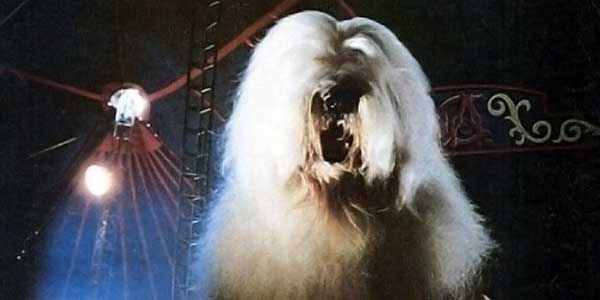 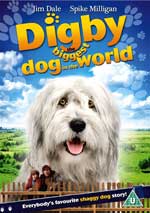 From the 1950s to the early 80s, the British film industry had a thriving sideline in almost ridiculously wholesome family entertainment. Much it came through the Children’s Film Foundation, but other companies got in on the act too, and through one of those we got 1973’s Digby The Biggest Dog In The World. Thanks to showings on TV it became a bit of fave for several generations of kids, but bizarrely it’s been unavailable on DVD for years. It’s particularly strange as while a lot of old kid’s entertainment is now horribly outdated and won’t work for modern children, Digby will still be enjoyed by youngsters and so it’s been a bit of an omission to have it out of print.

Apparently in the 70s the RSPCA were rather lax, as the film opens with the dog pound handing an Old English Sheepdog to a kid without then even checking with his mum it’s okay. However new owner Billy takes his new pet home, but has problems when his granddad doesn’t want to give the canine houseroom. His mother, Janine, comes up with a solution by handing the animal to her colleague Jeff Eldon (Jim Dale) to look after for a while.

Janine and Jeff both work at a NATO science research facility, which has been working on Project X, a substance designed to speed up the growth of vegetables, but which actually makes them grow and grow and grow. I’d imagine that between that set up and the title of the movie, you can guess where we’re going here. Jeff nicks a bit of Project X and takes it home in the hope of creating some giant roses, but a mix-up means Digby gets the substance instead.

The dog begins growing exponentially, which inevitably causes a lot of trouble, especially when some men try to steal Digby in the hope of selling the enormous canine to the circus.

Digby The Biggest Dog In The World is sweet, good-natured, often silly (in a good way) entertainment, which seems carefully designed to have as little as possible to offend anyone (except for an air strike on a dog – yes, really – but even that’s done tastefully). Younger children will probably love it while adults who grew up in the 70s and 80s will still enjoy this nostalgic treat too. Admittedly older kids will find it rather tame, but under nines will probably find a lot to enjoy. Carry On stalwart Jim Dale is a charming centre for the movie, although Spike Milligan is slightly underused as a German psychologist.

The special effects are undoubtedly a bit naff, with the filmmakers doing their best to make Digby convincingly 50ft tall and only having partial success (and I’d imagine that even in 1973 nobody thought Digby was a real giant dog). It doesn’t matter too much though, as children won’t mind and adults are likely to find it oddly charming. In fact, with modern effects Digby could do with a remake, as it’s a story that could still find an audience and would probably be lot of fun. But until they decide to make that, it’s good to have Digby on DVD.

Overall Verdict: Proof that Jim Dale didn’t just make Carry On movies and still very fun family entertainment. It may be nearly 40 years old, but it’s still good for kids and a shot of nostalgia for 30 and 40-something adults.