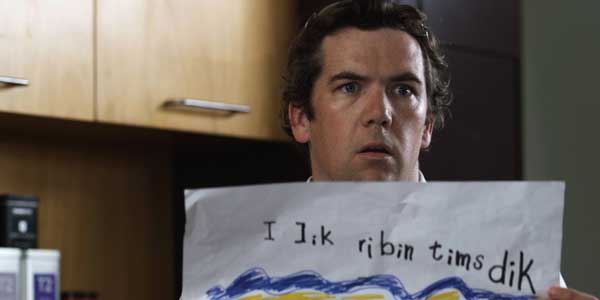 As most of the filmmakers here at Iris are saying, festivals like the Iris Prize are vital to the industry. They give budding film-makers the opportunity to prove their worth and explore the genres which influence them. The quality of some of the films so far has inspired confidence: lesbian and gay cinema is successfully delivering important messages to audiences subtly, and with great effect. From the character exploration of Prora (Stephane Riethauser) and What Are You Looking At? (Faryal) to the cinematic excellence of It’s Consuming Me (Kai Stanicke) and Days of Awe (Rehana Rose Khan), the new standards are making this niche available to all audiences, and not just those in the LGBT community.

The shorts opened on day two of Iris with dik, a gut-bustingly funny and thought provoking insight into views and beliefs about homosexuality Down Under. The Australian entry from director Christopher Stollery shamelessly exposes the stereotypical beliefs and old fashioned perspectives held by so many, including the couple whose own sexuality is thrown before the jury after their son’s fascination for pink and Tim’s ‘dik’ makes them divulge their own previous ‘experimentation’.

Explored in such a fun and cheeky way, the plot twist is executed brilliantly by actors who are clearly having a great time playing the roles. The young boy who’s passion for writing sparks a sexual orientation crisis in his parents is played best of all. dik is fun, sweet…and highly recommended.

From the humorous to the strange and slightly perturbing. Og Leken Er God (And the Going is Good) by Norwegian film-maker Vibeke Heide is more an exhibition of artistic cinematography than narrative or exploration of character. Playing out a sequence of situations, including a young girl hiding her childish accident and two girls trying to get inebriated, the three events are linked awkwardly and the audience is left at a loss for some moments, as scenes stay past their welcome.

Beautifully shot, the wide range of angles is pleasing and shows how much detail and care was taken in the filming, which is extremely satisfying. However, there are some who may see it as a little too ‘Ingmar Bergman’, and even a little creepy in the way very young girls are made the subject of the camera’s ‘fixation’.

In another exhibition of artistic film-work, Rehana Rose Khan’s Days of Awe is refreshingly original. Using a hypnotic single, swooping shot to explore the apartment of Daniella, the unseen protagonist, we gain an insight into her life and quirks through the suggestion of the props. The one scene spans ten days and plays out in quick time, as the audience is left to figure out what has happened to Daniella. All narrative and character exploration is told through a series of answer-phone messages.

The messages grow darker at just the right pace to ensure a growing sense of unease, as it becomes clear that Daniella has faced serious online-bullying and rejection from her dad following her coming out.

The single shot is a fascinating new take and technically excellent. It creeps under your skin for a disturbing climax, as you begin to dread the next phone ring. Given the importance of the message, and the seriousness of the new phenomena of online bullying, the director had a heavy burden to do this right; one she has borne with style.