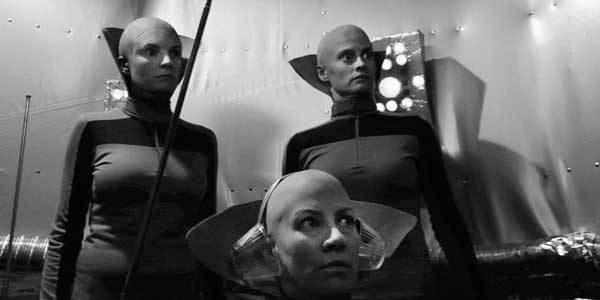 Quirky comedy and delightfully tacky special effects, Codependent Lesbian Space Alien Seeks Same (hereafter ‘CLSASS’, to prevent early arthritis) follows three emotionless and clueless lesbian space aliens (go figure). They find themselves in New York, where they seek love and heartbreak in an effort to rescue their dying planet. Zylar plays it fast and loose, in every meaning of the word. Barr is the needy codependent who chases more than Zylar is willing to give. Finally Zoinx crash lands on Earth and finds love with human Jane, who’s never quite fit in. All this while the gang is followed by possibly the two most incompetent government agents the galaxy has seen.

CLSASS has its tongue almost boring a hole in the side of its face. It is self-aware sketch comedy at its best. Firmly in on the joke, the film relieves itself of all pressure as we all take the silly journey together. Madeleine Olnek sets the tone brilliantly, choosing black-and-white film, kitsch UFO models and ridiculous special effects, harking back to the 1950’s Sci-Fi golden age. But don’t let the easy laughs at the expense of the FX department fool you.

The comedy is sharp-tongued, satirical and timed oh-so-sweetly. It had the screening audience roaring with laughter throughout. Jackie Monahan’s Zylar is a scream, playing off the others with cheeky looks and ‘crazy eyes’. She is clearly having a great time. The whole cast succeeds in making Olnek’s writing seem fluid and impromptu; apparently she runs a very tight ship when it comes to the script! The characters feel strangely natural and the dynamic between them very believable.

It is impressive how the film manages to create some real touching moments with aliens who appear completely emotionless. The relationship between Zoinx and Jane, and Barr’s vain yearning for codependence with Zylar, ensure CLSASS keeps some emotional depth despite the steady stream of gags

Yet the real highlight is the standout performances by the two ‘Men in Black’ government agents. Alex Karpovsky and Dennis Davis steal the show with their dysfunctional partnership and mutual incompetence. Their dynamic is very well played out. It provides the perfect respite from the more soppy parts of the space aliens’ stories. The ‘donut’ incident will have you laughing until you get a six-pack.

Unfortunately there are times when CLSASS seems unsure of itself. Essentially a series of sketches, the narrative sometimes gets lost leaving you confused. The filming style also switches liberally between fly-on-the-wall documentary style and a fixed shot cinema aesthetic. The combination of these two short-comings disrupts the flow, and highlights the ‘sketch’ comedy aspect of the film.

Overall Opinion: A little unsure of what it wants to be, there will be moments where you are left baffled. At times it does feel quite disjointed. However, you will be swept along in a sea of laughter as the cast deliver succinctly written comedy with expert timing. There are some truly memorable moments (“Where are you from…?”), and brilliant performances which raise you up when the story seems to sag. At its core, this film is family friendly fun. You will learn something from the subtext, be touched by the characters on screen, and share a laugh with your friends and family. A good time in a nice concise package.