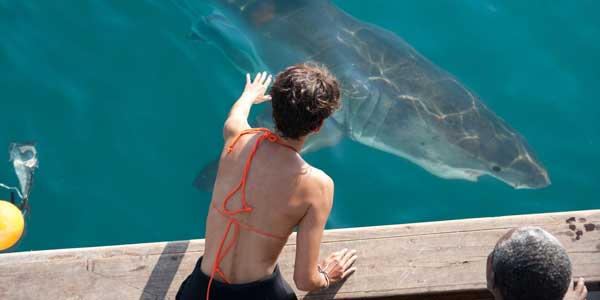 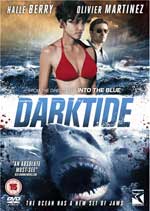 Halle Berry is ‘shark whisperer’, Kate, who’s able to swim with Great Whites outside the cage. However while her lover Jeff is filming her for a documentary, a terrible accident occurs and someone is killed by one of the giant fish. Cut to a year later and Kate is a bit gun shy about getting into the water with sharks again, but with cash running low, the now estranged Jeff turns up and suggests a way she can get out of financial trouble. A businessman called Brady (Ralph Brown), who’s visiting with his son in South Africa, will pay $100,000 to be able swim with sharks outside the cage. Kate initially doesn’t want anything to do with it, but slowly she’s talked into it, even if she won’t guarantee the man will be able to get out of the cage.

As they head out into the wild blue ocean, things escalate as the businessman becomes increasingly pushy, the weather turns nasty and the sharks get increasingly hungry. It won’t come as a shock to hear things turn nasty.

While Dark Tide should be slapped on the back for attempting to be as much a dramatic character study as a shark thriller, it doesn’t really work. A lot of the dialogue sounds like it comes from a slightly hackneyed play and although it pays lip service to complex characterisation it’s incredibly predictable and never goes beyond the obvious. Even those moments where things are meant to take a slight left turn are slapped on the audience so bluntly they lose the impact they might have had.

It doesn’t help either that most of the people involved are pretty unlikeable. Jeff is an arrogant ass, Brady is stunningly unpleasant (even what’s meant to be the ‘now I understand why he’s being a prick’ moment doesn’t help) and Kate is pretty bland. Only Brady’s son comes out with any real empathy, meaning that when things go bad out in the ocean, he’s the only one you’ll be hoping makes it out alive. Although films don’t have to be about nice people, it makes it difficult to care when bad things happen to unpleasant people.

Halle Berry presumably got involved because she was intrigued by the supposed character drama, but to be honest, the whole things feels like it should have been made with b-list actors and shown late at night of Syfy. On the plus side, the ocean footage is good, with plenty of cool shots of sharks and big blue vistas. Indeed, it would have been better if the actors had just stayed in the hotel and we simply got to watch the fish.

Overall Verdict: A limp, tedious thriller that desperately wants to be more character drama than shark thriller but only ends up being a predictable film about unpleasant people.