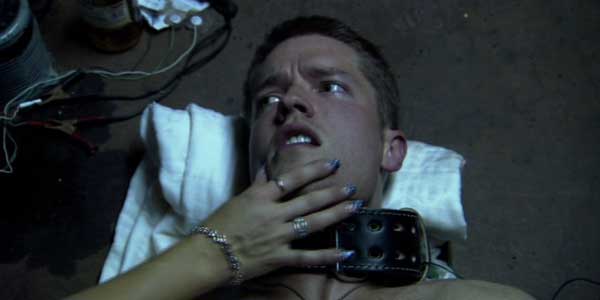 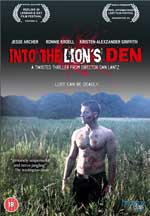 The film sees three gay friends, Michael (Ronnie Kroell), Johnny (Jesse Archer) and Ted (Kristen-Alexzander Griffith), on a cross-country road trip heading for the big city. Johnny is busy shagging his way across the country, something the others have reservations about. When they arrive in a small town, Michael just wants to go to sleep, but Johnny drags them all to a rough looking bar, where he’s organised to meet someone for sex. However the evening turns out to be far more dangerous that any of them expected.

Into The Lion’s Den is a broad mix of the good and bad. Unlike most horror movies, it really tries to create proper characters, with a plot that doesn’t just spin out of control for the good guys, but also for the more villainous characters. It also has a few unsettling, unpleasant scenes, from a nasty rape to a close-up of somebody getting injected in the penis. However it suffers from its lack of budget, with sometimes muddy audio, dialogue that’s occasionally a little jarring and acting that varies from pretty good to rather dodgy.

It’s also a little too straightforward for its own good, so that the plot has such a straight arrow trajectory it feels a little like it’s over before it’s begun – although that’s admittedly a lot better than the endless horror movies where you’re bored rigid despite a relatively brief running time.

I’m also starting to wonder whether there’s a handbook somewhere that says that in a gay-themed movie you have to include some male nudity and/or raunchiness in the first five minutes, even if there’s nothing quite like that in the rest of the movie. I presume it’s to ensure viewers keep watching in the hope of more nudity, which to be honest probably works. In this case you get a semi hard-on for your trouble (as well as a bit more nudity later on)!

Into The Lion’s Den is not a bad film, even if the villains go a bit over the top towards the end and it begins to lose believability. It’s certainly interesting that the script isn’t just about gay characters getting into a scrape, but that their sexuality actually informs what happens (although I was slightly uneasy about the use of HIV as a weapon).

The special features include a ‘making of…’ featurette, which includes some interesting info on low budget queer genre filmmaking. There’s also an amusing blooper reel, some deleted scenes and a commentary, which are worth a look.

Overall Verdict: Although it’s not a great horror film, it’s certainly watchable, with a few unsettling scenes and an interesting way of bringing a gay sensibility to horror.