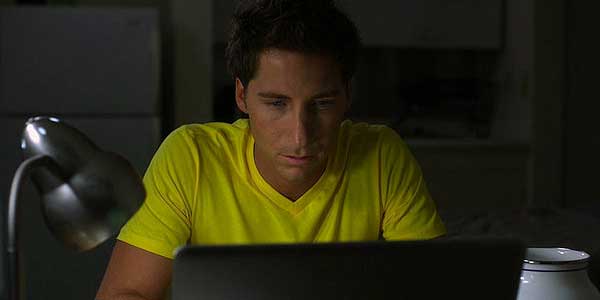 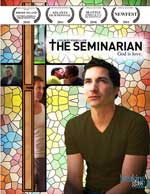 I slightly wonder if the title of this one will confuse a few people, who’ll think a Seminarian is some sort of sexual stud, when it’s actually a ‘student in a theological seminary’ (thank you Dictionary.com). That said, The Seminarian does follow one of my maxims about gay-themed movies, which is that a penis will appear in the first 10 minutes, preferably in an unnecessary context – but then if I looked as good nude as Mark Cirillo I’d be unnecessarily naked a lot too.

However this is not a movie about tricking people into thinking Semin is the same as Semen or simply titillating the audience with the sight of a willy, it’s actually a romantic drama about a young, closeted man called Ryan (Cirillo), who’s trying to write a thesis he hopes will get him onto a top PH.D  theology course. His subject is ‘The Divine Gift Of Love’, looking at whether love in its many forms is an aspect of us being made in God’s image (and therefore any love for another person is an expression of His goodness), or if the seemingly unneeded pain love brings is incompatible with a truly good God.

Perhaps unsurprisingly, his ideas about love alter depending on the ups and downs of his own romantic and personal life. Ryan is not into one-night-stands (although that’s not to say he’s never had any) and has invested a lot in a year-long online relationship with a guy called Bradley. When they finally meet, Brad is everything Ryan had hoped, but a second meet never seems to come and Ryan can’t tell if Brad’s genuinely interested in him but having major problems in his own life, or if he’s being strung along.

Mixed into all this is Ryan’s relationships with his fellow students, including some of the Seminary’s other closeted gays, one of whom has a bit of a thing for Ryan. There are also those around him he has to keep his sexuality from, not just due to fear of their judgement, but also because telling the wrong person could get him thrown out of the homophobic religious school. With few people to talk to about his inner life, Ryan begins to find everything increasingly stressful and difficult to deal with, which isn’t helped by the fact he’s also hiding his sexuality from his mom.

With Ryan’s slightly camp manner, you might think it odd that most of those around him don’t know he’s gay, but then most of us have known someone who made Liberace look straight-acting but whose parents and/or friends were oblivious, so it’s doesn’t stretch credibility as much as it could. What’s slightly more difficult to accept is the film’s conceit of Ryan going to see his professor about his thesis, which is essentially an excuse to give us mini lectures on the film’s themes. It’s the sort of thing that happens in a lot of indie movies, and while it doesn’t completely ruin the film, it does feel a little cheesy that they couldn’t have found a more organic way to deal with the ideas the movie wants to explore. Admittedly it might have been a tough job to cover all of them in a different way, but that’s the problem with a movie that wants to deal with slightly more ideas than it really has time to cram in.

That said, it is an involving movie and many will be able to relate to the problems Ryan faces, from feeling you don’t have anyone to talk to, to not knowing whether you’re being strung along by a potential lover. Ryan really wants to find a way to be true to himself that also feels true to his faith. Thankfully the film doesn’t get too bogged down in ‘God hates gays’ conflict (although it doesn’t pretend everything’s totally hunky dory on that score), instead focusing on reconciling the pain of love with the love of God, as well as coming to realise the importance of forgiveness. Some of the supporting characters seem a little underused, but you can kind of understand why, as while they have great potential to further explore the movie’s ideas about the different challenges of love and desire, the acting outside the very core roles is often a little weak.

There’s a slight feeling the movie ends before anything’s truly been sorted out – indeed the credits start just as that’s about to happen – but The Seminarian certainly take you on a journey into one young’s man’s life and his search for happiness and understanding of love.

Overall Verdict:  While The Seminarian is a flawed film, it was obviously written and directed from the heart by Joshua Lim, who’s really thought about what he wants to say and the emotion he puts his main character through. It may not always be 100% effective, it does draw the audience in and keeps you interested.