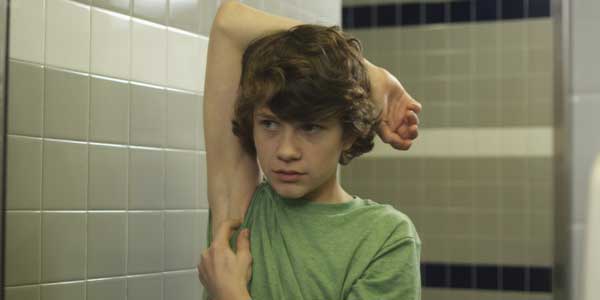 Thirteen year old Gabe Kowalski has a blossoming crush on his classmate, Shane. During a sex-ed class Kowalski discovers Shane’s partiality to men with a little body hair. Unfortunately for Gabe, his underarms are naked as the day he was born. However, while begrudgingly cutting his father’s hair, Kowalski is presented with the perfect opportunity to impress Shane: planting the off-cuts on himself like underarm merkins. But how will they hold up at a school pool party…?

As the film opens you are instantly hit by the vibrancy. Yeah Kowalski! takes you right back to all the silly things you did for an adolescent crush. Okay, maybe not quite like this, but the outrageous plot is so far out you can’t help but fall for Kowalski.

Shot selection is wacky and charmingly Matilda-esque. The production values are deceptively high, given the small budget. Yeah Kowalski! is a testament to what you can achieve even without breaking the bank.

Cinematically, the shots are alive with rich colours, the edits are sharp with confident comedic timing. The film’s soundtrack is pitch perfect and placed well, accentuating the feeling of every new scene. The acting is impressive for such a young cast, whose conviction and sense of fun are quickly adopted by the audience.

The ‘socially awkward adolescent’ comedy is distilled into its purest form here, and director Evan Roberts appears to have mastered the tricky art of ‘The Montage’: Kowalski’s swagger as he dons a vest to sport his comically long underarm foliage will have you in stitches.

Unfortunately the film’s energy flags at certain points. A victim of the high standards it set itself, the couple of scenes feel a bit weak. Yet these moments are soon forgotten. Like a slap in the face the fun returns leaving you with a big, silly grin.

Overall opinion: A straightforward narrative which is dressed up to impress, Yeah Kowalski!’s ambition is big and beautiful. It’s the usually shy, quiet kid who turns up to the ball dressed to kill and stealing all the attention.

By no means perfect, it will keep you laughing for its entirety, and thinking about it for a long time after. You will be enchanted and left wishing for more, pouncing at the opportunity to watch it again.