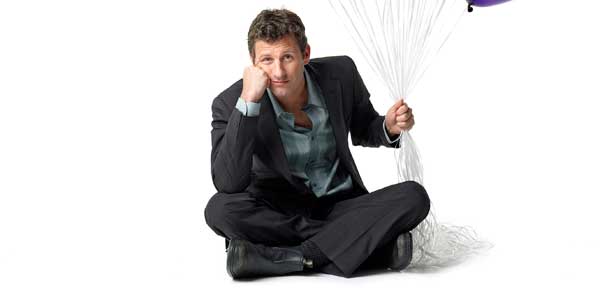 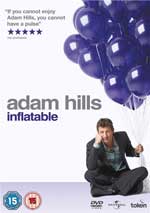 Adam Hill’s Inflatable DVD was first released last year as an HMV exclusive, but it’s now being reissued to all stores, so more people can enjoy it. The first thing that will strike any viewer of this disc is that comedian Adam is not the only one on stage. He also has a sign language interpreter with him. While the more cynical of you might think this was something he just did for the DVD to make him seem cool and inclusive, it sounds like he does it for a lot of his gigs.

It’s a good idea and seems to be appreciated, as there’s a posse of deaf people in the front row (one of whom gets on stage to sign Adam a happy 40th birthday). And if you do happen to be auditorially different to the mean average (i.e. a deafie), there’s an option on the disc to have the interpreter on screen all the time. Although the disc was filmed in Australia, I believe British Sign Language is pretty much the same as what the Aussies use, so it should be fine.

I presume Adam likes to be inclusive not just because it gives him access to fans who are shut out of most live comedy, but because he’s disabled himself, as he’s missing half of one of his legs. You wouldn’t know it unless he told you, but he brings it up during the gig, talking about the positives and negatives of going through airport security wearing a prosthetic limb, as well as his work hosting programmes during the Beijing Paralympics.

A lot of it is very funny, although it’s often a gentler make-you-smile humour than full on gut-busting laughs. That’s not a criticism as Hills he manages to bring a warm, we’re-all-in-this-together sensation to proceedings as he tells stories and finds jokes in unusual places. The opening of the set is essentially him chatting with the audience and bringing them up of stage, and while it seems to go on a bit too long, it does a great job of make the whole thing seem surprisingly intimate. That said, some of what Adam says to people seems a bit close to being rude, but it’s difficult to tell whether it’s really close to the edge or if Aussies don’t care as much about such niceties as not telling a woman it must be terrifying sleeping with her chunky hubby.

Indeed, the fact it was filmed on the other side of the world is occasionally an issue, as there are moments when Adam talks about things us Brits don’t know much about. For example a TimTam is apparently a biscuit and Spicks and Specks is a music trivia show Hills hosts in Australia, but when he first mentioned them during the set I didn’t have a clue. It also helps to know Kevin Rudd was the Australian Prime Minister and now it’s Julia Gillard, although you’ll pick that up quickly enough once he starts talking about them.

It’s all a lot of fun although perhaps not quite as good as some other stand-up releases. For example, Hills constantly mentioning they’re taping a DVD is a little annoying, and his chat about becoming an ‘old man’ feels a bit old hat. However it’s never dull, it’s just not as sharp all the way through as you might have hoped. That said, what Hills wants to do that most comedians don’t bother with is not just to make you smile but also to leave you with a bit of hope and a sense the world is a decent place. He does that with aplomb.

The disc includes a few special features, most of which are sections of the main show that were removed for whatever reason, including Adam being given a bag of sex toys and him putting together a boy band it IT workers. There’s also a brief set from his support act, who’s pretty funny, as well as some brief chats with audience members on their way into the gig.

Overall Verdict: Adam Hills can be very funny and that’s often in evidence here, even if the gig can be a little happy. However what he succeeds at isn’t just making you laugh, it’s making you feel good.