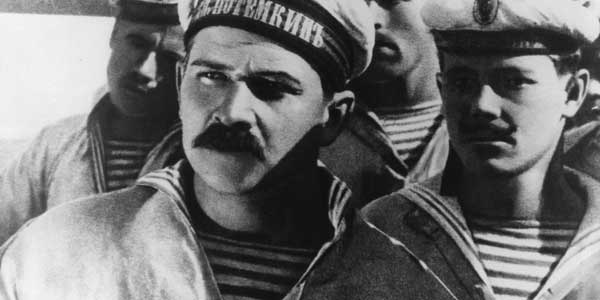 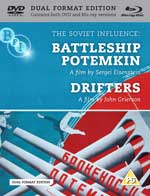 What this unexpected yet rather cleverly thought out DVD & Blu-ray dual-format release from the BFI does is recreate what’s been described as ‘the most celebrated double-bill in film history’, when these two movies screened at the Tivoli cinema on London’s Strand, on November 10th, 1929.

The reason it’s so celebrated is because it was the first British screening of Potemkin – a movie that’s since had an utterly profound effect on cinema around the world – while Drifters marked the birth of a socially relevant documentary style about working people that lasted for decades. It’s also true that John Grierson’s Drifters was strongly influenced by Potemkin, even if they’re very different movies.

Even 87 years after it was made, Battleship Potemkin remains a remarkable movie. Made in 1925, it tells the true story of a mutiny onboard the titular battleship. What starts as an argument between the enlisted men and the officers over whether they should have to eat maggot-infested meat, builds to the point where it looks like some of the men might be summarily executed. This leads the men to mutiny and join the growing protests against the Tsarist regime. They take the battleship to Odessa, where the government troops commit a massacre on the infamous steps (incidentally, the Odessa steps massacre never happened, but many believe it did, purely because of Sergei Eisenstein’s film).

Other than slain revolutionary sailor Grigory Vakulinchuk, Eisenstein isn’t that interested in creating individual characters in Potemkin (which certainly fits with a film about the masses revolting against the elite) instead solely using individuals to represent the proletariat. He creates a propulsive forward motion, using the techniques of Soviet montage that were emerging at a time. Although talking about Eisensteinian montage immediately makes most people’s eyes glaze over, its importance to cinema can’t be underestimated. Although some of the techniques employed in Potemkin seem a bit cheesy today (the bronze lions waking when an explosion occurs springs to mind), his use of editing not just to tell the story but to create meaning is extraordinary. (If you are by any chance interested in learning a bit more about montage – which is a surprisingly interesting subject and Potemkin is one of the best places you can see it in action – you can read about it there)

It’s truly remarkable that such an old, silent movie can still be so exciting. Some of the sequences really are heart-pounding, helped by Edmund Meisel’s classic 1926 score. The film was banned in Britain until 1954 (except for rare screenings, such as the one on the Strand), due to worries it would cause unrest amongst the working classes. If you haven’t seen the film that might sound like overly cautious Big Brother nonsense, but after you’ve watched it you might well want to go and find a Tsar and overthrow them, so perhaps the authorities were right to be worried. It’s little wonder the Nazis admired its propagandist abilities (even while banning it because it went against their idea), as it’s an extraordinary example of the power of cinema to affect hearts and minds. Indeed it’s rather sad that nowadays cinema rarely does what Eisenstein was capable of in the 1920s. He didn’t even have the benefit of sound, let alone all the amazing technology we have at our disposal.

This Blu-ray/DVD release features the recent complete restoration of the movie that took place in Germany and takes the film back as close to how it was in 1925 as possible, including reinserting the Leon Trotsky quote that opens the movie, which was replaced with one from Lenin when Trotsky fell out of favour. If you’re expecting something absolutely pristine, you’ll be disappointed. There’s still a lot of grain and other issues with the print, but the fact is, this is a really old movie that despite its reputation has degraded abysmally over the years. Earlier DVD releases have given us the film but it’s looked utterly dreadful – indeed I can’t think of that many films that have looked worse and still got a release.

This new restoration is a vast improvement, but thankfully it hasn’t been overly restored. If they’d taken it much further, the film would inevitably have looked fake, with an artificial, processed sheen that might has made things look sharper, but may also have started to make it look like the movie had been recreated using CGI. It may be far from perfect, but it still looks a lot better than we’ve had it for years, and perhaps better than we could have expected considering the quality of the materials they had to work with. It’s certainly true that if you’re planning to watch it on a decent size flatscreen TV, this HD release is the way to go.

While Battleship Potemkin is still a wonderful, pulse-pounding piece of propagandist cinema, it’s more difficult to fall in love with Drifters. What’s perhaps best about Potemkin is that as well as being fascinating and the most important movie of its time, it’s also surprisingly entertaining. Drifters isn’t as much fun. It basically follows a group of herring fishermen who head out to sea, catch some fish and head to market to sell their slippery goods. It’s interesting but not exactly entertaining.

It was one of the few films directed by John Grierson, who created it for the fledgling Empire Marketing Board to show off the industry and productivity of Britain and its colonies. He chose fishing as it was something he was interested in and which was then moving towards being a more industrial process (nowadays we tend to decry industrialised fishing, but in 1929 they thought it was cool and cutting edge).

Drifters is important as it helped kickstart a strand of British film culture that can still be felt today. It was one of the few films actually made by Grierson, who didn’t just spend years overseeing the incredibly important output of the General Post Office film unit (which produced the likes of the legendary ‘Night Mail’ and many of the films of Humphrey Jennings), he even coined the word ‘documentary’. Grierson also oversaw an English-language translation of Potemkin for US release, and you can undoubtedly feel the influence of the Russian movie on Drifters, not least in the way it intercuts shots of the engine room with the main action to create a sense of energy.

It was a smart idea of the BFI’s to include it on this disc, as it’s worth watching for its historical value, but on its own it’s difficult to imagine many people buying it. However, as a Blu-ray recreating the lauded 1929 double-bill with Battleship Potemkin, it will certainly mean a lot more people will watch it.

To round things out, the release includes a few other films that Grierson either directed or oversaw. There’s 1934’s Granton Trawler, which in many respects is a short remake of Drifters and was one of the GPO’s first experiments with sounds. The 1937 film, Trade Tattoo, is an intriguing, experimental Technicolor short espousing the ‘rhythm of work-a-day Britain’, using animation and highly stylised offcuts from GPO industrial documentaries. It’s a bit weird, but it’s got great energy, an unexpectedly humorous attitude and certainly makes the Post Office seem exciting. Finally there’s the 34-minute North Sea from 1938, which is what we’d now term a drama-documentary. It looks at the dangers of fishermen facing the elements. They’re all intriguing shorts that have been included to show the influence of Soviet cinema on Britain and more particularly on Grierson and his GPO film unit.

Overall Verdict: Battleship Potemkin is a great film, which is not just incredibly important but still remains an exciting watch, despite it age and lack of sound. The restoration might not be perfect, but it’s a huge improvement on previous DVD releases. Potemkin is surrounded by an interesting selection of British films, giving us a lesson in the Russian influence and the emergence of films about the working man that persisted in the UK for decades.