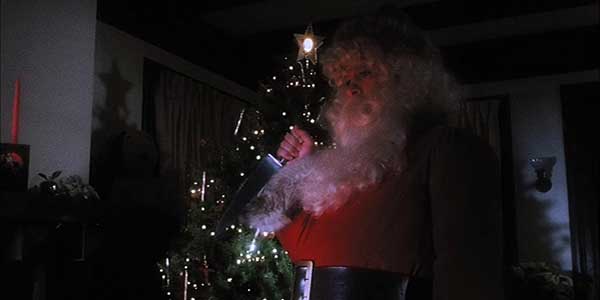 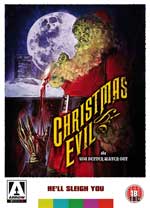 Christmas Evil is an odd film, but it’s certainly a cult one that has some loyal fans – mainly those who harbour a love for trash cinema. The likes of John Waters count it as a favourite (and indeed he pops up on one of the commentaries). So if you think a killer Santa sounds fun (it predates the more famous Silent Night Deadly Night’s homicidal Kris Kringle nuttiness), you may want to check it out.

The film starts out in 1947 when a young boy called Harry is traumatised by seeing Santa groping his mother.  33-years later Harry has grown into a maladjusted, Christmas obsessed man, who sees himself as the next Santa, spying on neighbourhood children and deciding who’s naughty and who’s nice. Over the course of a few days, the world around him becomes ever darker until he snaps, dons a Santa suit and a beard that he can’t take off and goes on the rampage. While he’s keen to protect kids and make sure the good ones get pressies, he kills those who taunt him or get in his way. Soon the word gets out and the people are keen to rid the streets of this psychotic Santa.

Christmas Evil is a strange movie that seems uncertain whether it wants to be a broad, slasher comedy, or a serious look at a man’s mind unravelling. Much of the movie seems like a fairly sombre Falling Down type film about a man who’s already precarious mental state tips into psychosis. He then goes out to set the world to rights, even if that means killing. However it’s shot through with odd comedy moments, so it’s difficult to tell whether you’re meant to find the whole thing funny, or just these ill-fitting bits. The fantasy moments at the beginning and end may be there for a reason, but they’re still pretty odd.

It’s cheap, cheesy and rather silly, and even the bloody killings look fake (although someone being repeatedly stabbed in the eye is rather nasty), but writer/director Lewis Jackson should be given kudos for attempting a slasher movie that really wants to have depth of character. Unfortunately it doesn’t quite work.

There’s a surprising amount of special features for a 32-year-old, relatively little known film. The disc includes two commentaries – one from writer/director Lewis Jackson, and the other with Jackson and John Waters – original story-board sequences, audition tapes, a collector’s booklet and interviews with Jackson and the film’s star, Brandon Maggart. It’s a good selection for a strange film. I may not have liked it, but it certainly has quite a few cult fans.

Overall Verdict: I may not have liked Christmas Evil, but there are certainly quite a few fans of its cult killer Kris Kringle shtick. It deserves credit for attempting depth of character, but its odd comedy and rough edges make it difficult to truly like.