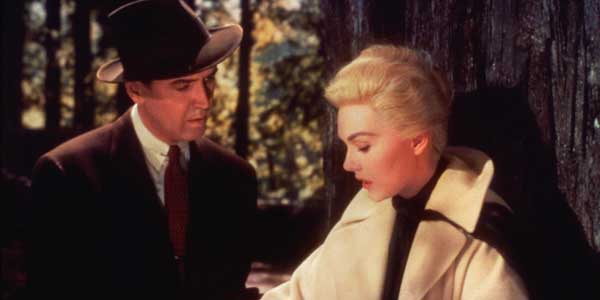 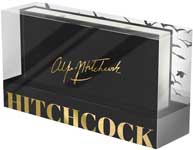 The box includes Psycho, The Birds, Vertigo, Rear Window, The Man Who Knew Too Much, Marnie, Saboteur, Shadow of a Doubt, Rope, The Trouble with Harry, Torn Curtain, Topaz, Frenzy and Family Plot, which as I’m sure you’ll agree, is a pretty awesome selection. Although the likes of Torn Curtain and Family Plot may not be Hitchcock’s best, they’re still far better than what the vast majority of directors have ever produced. Indeed Hitchcock is that rare beast where you can pretty much guarantee that even if you don’t think a particular movie is a masterpiece, you’ll be entertained and certainly won’t think you’ve wasted your time.

The best thing about this set though is that the cream far outweighs those Hitchcock films that might not be classed in the premiere tier. Psycho, The Birds, Vertigo and Rear Window in particular are amongst the best movies ever made. While with many classics you have to make allowances for their age and watch them in context of when they were made to fully enjoy them, that’s not true of Hitchcock’s best. They are as effortlessly entertaining as the day they were made.

As I’m sure you’re aware, earlier this year Vertigo supplanted Citizen Kane at the top of Sight & Sound’s once a decade poll of the greatest movie ever made. While there were a lot of articles about whether it really is the best film ever, I’d contend that the reason it won out is that it’s one of the very few films that has something great for pretty much every taste. If you’re looking for sheer entertainment, it has that (something Kane is lacking for many). If you want something provocative, thought-provoking and full of astonishingly complex characters, it has that. If you want something full of absolutely superlative filmmaking, it has that. Best score ever, the glorious Jimmy Stewart, odd surreal moments – yep, yep and yep.  I’d fully endorse it as the best film ever, and the ultimate example of why Hitchcock was a master of cinema – as he had the almost unique ability to make movies that are often as deep and complex as the artiest of art films, without compromising one iota on sheer, popcorn entertainment value.

Although not quite as great as Vertigo disturbing look at identity and psychosexual obsession, Psycho, The Birds and Rear Window are still awesome movies. It’s tough to beat Psycho for surprising left turns and disturbing ideas (indeed, it’s the granddaddy of all slasher movies), The Birds is one of the greatest looks at man versus nature and the fear of the logically inexplicable, while Rear Window’s all-filmed-from-a-single-room conceit is one of the most impressive of all film experiments and a truly wonderful thriller.

The other films are no slouches either. Although Rope’s idea of trying to make a movie with as few takes as possible (contrary to popular opinion, it’s not shot to appear as if it was all filmed in one take. While there are several hidden cuts, there are also a few ‘proper’ ones as well) is only partially successful, it’s still a wonderfully unsettling film, with plenty of dark humour as two killers hold a dinner party while the body of the victim is hidden in the same room.  Indeed all of the rest of the movies may have a few flaws, but their successes still outweigh their issues.

As for how they look on Blu-ray, that’s a bit more of a mixed bag. It appears Universal has lavished plenty of care on the crème de la crème of the collection, while giving the rest decent but not astonishing transfers. Psycho, for example, offers a sharp, crisp and wonderfully detailed image, while Rope is still a massive step up from DVD, but the picture is undoubtedly not as clear and bright as you might have hoped.

However the movie that’s probably the biggest revelation is Vertigo. Not too long ago the film went through a complete restoration and that’s now been transported over to Blu-ray. It looks absolutely astonishing; with a pin-sharp picture that trounces the DVD in pretty much every way. It’s also a rare case where a transition from standard to high def materially improves the film. There’s a huge amount of subtle but important lighting changes in the film, which are sometimes difficult to see on DVD, but really jump out of Blu-ray.

The broadened colour palette also makes a surprisingly big difference as well, particularly to the way the character of Madeleine (Kim Novak) is framed. For example, on DVD the first time we see her she’s in a slightly dull red restaurant wearing a black dress with a green trim. However on Blu-ray the red is overwhelming and slightly hallucinatory, while the blacks of the dress are like an abyss, contrasting sharply to the almost impossibly green edges. None of this is accidental and the result is a truly mesmerising introduction to a slippery, strange and mysterious character. The scene definitely had less of an impact on DVD, but looks incredible in HD. There are numerous moments like that in the film. It helps that it was originally shot in VistaVision, which was a significantly larger format than traditional 35mm, and therefore allowed a sharper image from the get-go, but the restoration is also impressive.

While there are a few discs where you might wish the picture quality was a little better, they’re all significant improvements on their DVD equivalents and none of them look bad.

The features mirror the picture quality in that while none of the discs is bad, it’s the best fills that have been given the most attention. The power quartet – Rear Window, Psycho, Vertigo, The Birds – each have a great compliment of extras that cover all aspects of the films from their creation to their place in film history. These discs are fascinating, with things such as excerpts from the legendary Hitchcock-Truffaut Interviews, where the master talks about each of the films. There are also plenty of documentaries, titbits like Tippi Hedren’s screen test for The Birds and loads more. The Birds also includes a very interesting new documentary, ‘The Birds: Hitchcock’s Monster Movie’, which is well worth a look.

Although there’s far less on each of the other discs, there’s still enough to keep your interest once the film has ended. For example, Rope includes an interesting ‘making of…’featurette, looking at how they shot the extended takes (and remember this was an age before steadicam and Technicolor cameras were enormous, so it was a real technical feat) to the fact that known but unspoken even on the set was the fact that the two killers are also supposed to be lovers. Each of the film includes at least one interesting featurette, along with a couple of other intriguing nuggets, such as alternate endings for Topaz.

It really is an excellent collection and a bit of a must have for any discerning film fan. While there are many who shy away from old films for fear they’ll be dull, Hitchcock really should be the exception to that, as his films are as effortlessly entertaining as they’ve always been, and on Blu-ray they look better than we’ve ever had them in the home before.

Overall Verdict: Hitchcock is probably the greatest filmmaker ever, and with a set that includes many of his best, along with a bunch of other entertaining movies, this is a great selection, looking better than it ever has in HD. For my money it’s worth getting just for Vertigo, but you certainly won’t be disappointed by the other 13 movies.

Marnie (1964):  The Trouble with Marnie,  The Marnie Archives,  Theatrical Trailer