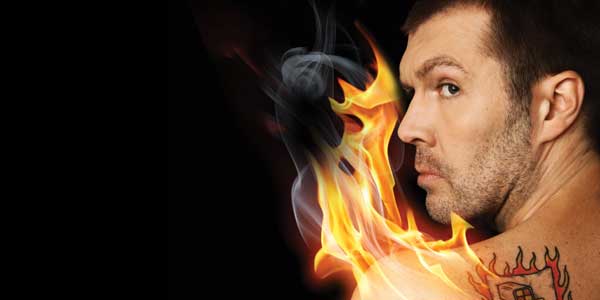 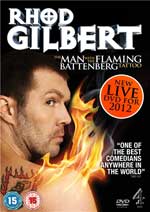 Then I watched this disc’s special feature, ‘Rhod vs. Hecklers’, which sees the comedian answer audience comments that were cut out of the main show. The first half of this feature is pretty standard, but then Rhod starts talking about how he hates the adverts pinned on the wall in front of men when they’re standing at urinals. A woman tells him that girls have the same thing on the back of the door of their toilet cubicles. And that’s enough to set Rhod off on a rant that shows just what pedant he can be, where he gets increasingly annoyed as he’s determined it’s not the back of the door, it’s the inside.

It’s a pointless, petty argument, but Gilbert cannot let it lie, and as the thousands of people at the Hammersmith Apollo increasingly tell him he’s wrong – of course it’s the back of the door – he gets ever more frustrated, determined that he can convince these people he’s right and they’re wrong. The more he talks and the more the audience won’t accept it, the more he starts to lose it, not in anger but in literally not knowing what to do with himself.

Any other comedian (or person) would have just gone ‘whatever’ or not even thought about it, but for Rhod it becomes a point of contention that cannot simply be allowed to slide by. And the thing is, it really, genuinely appears that for those few minutes this stupid argument is vitally important to him. He is not pretending. He allows it to completely throw the pace and direction of his story, because, God damn it, people need to accept doors don’t have backs!

It’s always been difficult to tell with Rhod how much of his personal story style is based on real life and how much is exaggeration and confabulation. After watching this special feature, I’m prepared to believe a lot more of it is genuinely true – or at least heavily based on truth – than I would have previously.

As always with Rhod, the show is a lengthy tale with numerous digressions, this one dealing with how he ended up getting the titular Flaming Battenberg Tattoo and the consequences that stemmed from it. This takes in everything from what a rubbish, dreadful Christmas gift an electric toothbrush is (and why after going on TV on Christmas Day and slagging them off, he found himself having to buy one himself a few days later), to why Tesco won’t allow him to buy a single baked potato if he wants one. The other over-arching part of the story is the run up to a holiday to New York that he and his girlfriend booked – and which they’ve agreed is a make or break trip.

Throughout the gig Rhod reads from his anger management diary, which he’s (supposedly) been keeping to try and hold his fury in check. In fact it’s an interesting move on from his earlier shows, which were almost therapy for him, letting him rip into his frustrations and annoyances and get a theatre full of people to agree with him. With this show he genuinely seems to be trying to leaven that with an ability to not let these things get the better of him and to stop being so petty – unless you suggest a door has a back to it, of course.

It’s very funny and as with his previous shows, the story structure makes it feel like there’s a real point to it. It allows him to bring in recurring themes and little ideas that help ensure this isn’t just about the laughs (although there’s no problem with the funniness either). I do wonder whether his unique brand of pedantry is on the edge of wearing thin, as while earlier rants about hoovers and the like were smart and clever rips into the stupidity of modern life and marketing, here they occasionally feel as if they tending towards pointless over-exaggeration, and are on the edge of pandering to the audience. However he definitely hasn’t lost his touch, as they still work, even if his style might need a bit of refreshing in a few years time.

Purely in terms of laughs, I’d say it’s a step up from his last release, Rhod Gilbert And The Cat That Looked Like Nicholas Lyndhurst, although not quite as good as his first disc, Rhod Gilbert And The Award-Winning Mince Pie. However all his releases have been very funny, so you’re unlikely to be unhappy with any of them.

He is a funny man, although if he genuinely is trying to keep his anger in check, it’ll be interesting to see where he goes next and how it affects his comedy. He’s made a name for himself with his hilarious ranting, but he may have to start evolving to make sure things don’t go stale and also to reflect the more relaxed attitude he seems to want to be part of his life. Either that or one day his head will explode, we’ll have to wait and see.

Overall Verdict: Gilbert is a funny man and it’s good to know he does get as annoyed about tiny things as he appears to (although it’s probably not good for him). He’s come up with another good show with plenty of laughs. If nothing else, it’ll teach you not to get tattoos of Battenbergs.