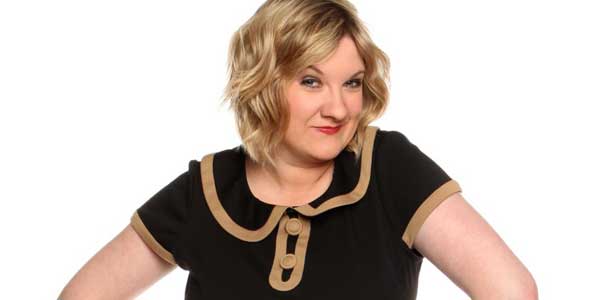 Sarah Millican is proof that if you dream of being a comedian, you don’t need to be like Jack Whitehall and Daniel Sloss, who came out of the womb with a microphone in their hand. Millican was 33 before she had her first Edinburgh Fringe show, which won the if.comedy award in 2008. Since then she’s had a quick rise to stardom, including national solo tours, numerous panel show appearances, her own TV series and now her second live DVD, Thoroughly Modern Millican.

It’s little surprise she’s had such success as she’s a very funny lady. Some who’ve only seen her on TV might be surprised about how rude she can be, as she’s a woman who likes to swear and isn’t afraid to tackle sex head-on. Her material here features a lot of that, including her attempts at dirty talk and what she gets up to in the bedroom. It’s all very funny, as is her repartee with the audience, who she spends time asking questions and riffing on their replies.

Ever since female comics like Victoria Wood and Jo Brand started to emerge, there has been some criticism about the fact that their main subject has often seemed to be the fact they’re women, while the perception is that male comics don’t spend most of their set talking about the fact they’re men. In some ways it’s inevitable purely because they are women, and so topics that impact them might well be different to those men are interested in. It’s also true that simply because there are fewer of them, the fact they talk about these things stands out amongst the predominant male comedy voices (whose viewpoint is far more about being men than many suggest).

There’s no doubt that Millican takes on quite a few women’s issues, but she makes it all very human, which I think is one of the reasons people like her. No matter what your gender, she’s very inclusionary even if her comedy is quite personal, with her subjects looking at all sorts of things about modern life but from a woman’s point of view. I also think people respond to the fact she’s unafraid of her quirks. A lot of comics seem to want to desperately point out how cool and normal they are, or otherwise their comedy is all about how weird and abnormal they are. Millican meanwhile is more like the rest of us, aware that not everyone might be exactly like her, but accepting that doesn’t make her weird.

Thoroughly Modern Millican sees her as an assured comic, who knows what she’s doing and how to make people laugh. While her occasional reliance on jokes about eating can feel a tad tired, most of the time what she’s got to say is fresh and smart. I just hope she can keep it up, as she’s one of those comedians you can imagine bringing people laughs for years to come. With successful stand-ups, the make or break is normally around this point in their career, when they’ve found fame and everyone’s telling them they’re great. It becomes a real problem if they start to believe the hype (it’s also difficult if they start living a celebrity lifestyle, as they sometimes lose the ability to be as funny because they forget what makes the common man tick). I have a feeling Millican is smart and humble enough not to let her skyrocketing career go to her head and so hopefully she’ll stay funny for years to come.

On the evidence of Thoroughly Modern Millican, that means we’re in for more treats, as this is a very funny disc with plenty of laugh out loud moments and real re-watch potential.

There are also a few worthwhile special features, including Millican answering questions about her comedy, which is both funny and informative.

Overall Verdict: Millican is a very funny woman who’s at the height of her powers here – she knows how to be funny, how to play to an audience and how to ensure everyone has a good time, whether they’re in the audience of watching at home.