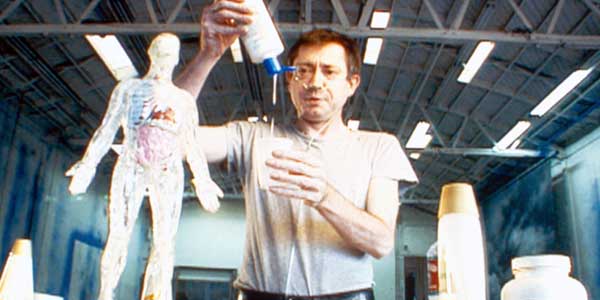 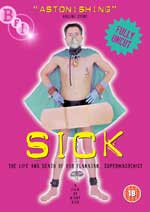 It’s hardly worth reviewing Sick, as just mentioning that it’s a documentary about a man who nails his dick to a piece of wood and then dies a horrible, painful death (those two events aren’t connected, incidentally) is pretty much a guarantee everyone is going to watch it. However in case you haven’t rushed off to order your copy and want to know more about this fascinating, complex and often difficult to watch film, I’ll try and oblige.

As the title suggests, Bob Flanagan was a major masochist with a lover who he allowed to dominate him, complete with whips, chains, clamps, suspensions, piercings, knives and all manner of other SM practices. However he was also an artist and writer, as well as one of the oldest surviving Cystic Fibrosis sufferers. The documentary looks at his life, covering the childhood he wasn’t expected to survive and the fact he started his masochistic activities when he was just a teen.

It then follows through with his life at the time the documentary was shot in the mid-90s, including his relationship with Sheree and his performances, which take a very frank look at his illness, sex life and his love of pain and being dominated.

Sick is a fairly open documentary that doesn’t try to force a viewpoint onto its subject and instead simply looks at it. If you’re willing to engage, it’s a fascinating and often disturbing ride. Flanagan is undoubtedly a fascinating figure, who been racked with pain and illness since birth, and channels that into masochism and art. While the film is interested in why he may have become a ‘supermasochist’ (a terms he refers to himself as) it refuses to give easy answers. Indeed it ends with a piece of writing Bob did, where he himself gives a multitude of possible answers.

In fact the documentary seems to be very wary of giving the audience an easy way out. The simplest pop psychology answer to Bob’s love of masochism is that his entire life has been about pain and illness, and one of the main ways of dealing with CF is with massages that involve being slapped in particular places in order try and dislodge mucus on the lungs. If he’s been having that done by his parents since birth, it would be easy to suggest that this is the reason why he equates pain and being hit with love. However the documentary doesn’t want things to be easy, so it’s left up to the viewer to question Bob and his predilections, as well as to accept that whatever the reasons, it’s how he wants to live his life.

There are also inevitably questions about S&M itself and the attraction it holds for some people. When you watch what Bob does, it’s very difficult to put yourself in his place and truly understand why he’d want to have needles shoved through his scrotum, to be suspended upside-down by his ankles, and have his lips sewn together. But there’s undoubtedly some satisfaction he gains. Again it would be easy to say it’s a way to escape from his illness for a while, but there are plenty of people without CF who like the same things, so once more it’s not that simple.

Sick is undoubtedly disturbing and you get to see a lot of extreme sexual practices you might wish you never had. Indeed many go so far – including the close-up of the dick being nailed to a plank of wood – that until recently three and half minutes were cut out by the BBFC, because they were seen as too easy to imitate. They’ve now been reinserted. Some viewers may wish they hadn’t, but it certainly ensures this is one of the most in-your-face, challenging documentaries you’re likely to see.

More difficult to watch than all the edge-baiting sexual practices is Bob’s eventual demise. While the actual moment of death isn’t shown, his suffering and the terrible end for people suffering from this disease – they essentially drown in their own mucus – is tough to watch. That said, it is a vital part of the documentary, as Bob’s life is so much about opening everything about him up to scrutiny, that allowing people to see his death is a necessary part of that.

There are also some good special features, including an interview with the director and editor, and a featurette catching up with helmer Kirby Dick. They’re both very interesting, looking at how the film came to be, how they went about capturing Bob’s complex life and the difficulty of deciding what to put in the final movie. There’s also a featurette catching up with Sara, who’s seen in the film as a CF-suffering teenager who was inspired by Bob when she read his book and met him a few times. Along with that are some intriguing deleted scenes and a booklet looking at the movie, Bob and the reason it was initially censored in the UK.