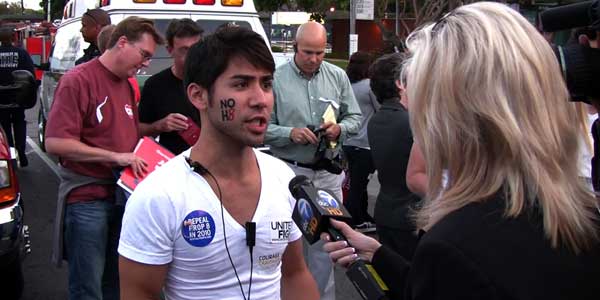 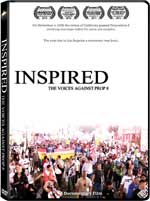 First a bit of history. In 2008, a California Supreme Court ruling decided that same sex couples had a constitutional right to marry in the state. The only way to overturn that was with a constitutional amendment voted for by the populace, and so in November of that, those against gay marriage ensured that Proposition 8 was on the ballot, which was designed to add a clause to the California constitution saying that, ‘only marriage between a man and a woman is valid or recognized in California.’

The proposition passed, with 52.24% of people deciding same sex couples shouldn’t have the right to marry. Previously when this sort of thing has happened in the US, the response from the gay community was anger mixed with resignation, but this time it sparked a whole raft of grass roots organisations to spring up to fight the measure. The reason for this is perhaps that while all previous votes over same sex marriage across the US had always gone against equal marriage, this time it was taking away a right couples in California had had for five months. In that time 18,000 gay people had gotten married, but now they were in a legal limbo (it wasn’t known if their marriages would be annulled or not) and no other gay people could join them.

The documentary Inspired takes a look at the response to Prop 8 within the LA gay community. At the time Los Angeles wasn’t particularly well known as a centre for the gay rights fight, probably because gay areas such as West Hollywood and Silver Lake were so well established and relatively blocked off from the worst homophobia, that people didn’t really feel the need to fight – they had most of what they needed and were inured to the rest. That changed for many with Prop 8, and in the days after the vote numerous extremely well attended protests happened across the city.

Things didn’t stop there though, and the documentary follows various groups and people as they continue to organise and fight between the day the proposition passed and the ‘day of decision’, when the Supreme Court decided if the vote was valid.

It’s a very interesting documentary, showing how many protesters surprised even themselves with how involved they got, and also how many others were prepared to join them in their fight. It’s not all hugs and kisses though, as Inspired doesn’t shy away from the difficulties. These problems come as much from within the community as outside, not least the struggle to get everyone at a protest to follow the rules.

There are also major divisions amongst the many different new grass roots organisations over the best way to make themselves heard – indeed the only thing they seem to agree on is that the older, more mainstream organisations have gotten it wrong. In the documentary there seems to be particular difficulties between groups representing predominantly white and/or gay areas, and those focussed on people of color, with the latter feeling that a different, perhaps more aggressive approach is needed in their communities.

These sorts of divisions have a long history in protesting (you just need to look at how many different groups and ideas about the best way forward there were during the Civil Rights era, from the Black Panthers to Martin Luther King’s SCLC). Indeed they are somewhat inevitable, but here it’s good to see that no matter how wrong they think each other’s ideas are, they’re all still working hard towards the same end and have enough respect to not actively work against one another.

I also have to say that I like the way that whenever major gay right protests take place, there always has to be something a bit, well, gay about them. Stonewall took place on the night of Judy Garland’s funeral, and here what the protesters really want to do is march to Hollywood & Highland – home of the Oscars. (It is true Hollywood & Highland is a symbolic centre for the famously scattered city, but you still have to love the gay-ness of it).

On the downside, the LA focus of the documentary does sometimes seem a little myopic. Although the film was obviously made in and had access to people of Los Angeles, it’s so focussed on the city.county that it’s difficult to tell how these protests fit into the bigger picture. The suggestion is that Prop. 8 caused a massive waking of gay consciousness in LA and the city became central to the fight, but in Inspired it’s difficult to tell whether that’s true or if we’re simply not seeing other’s contribution.

However Inspired does live up to its name, showing people getting involved and changing their lives through standing up for something they believe in. It’s also particularly timely, as the recent US election saw Washington, Maine and Maryland become the first US states to vote for same sex marriage in a public ballot, with many suggesting the movement that caused this wouldn’t have happened if it weren’t for the fight against Prop. 8. The first same sex marriage license was issued in Washington on December 6th.

We’ve also just heard that the US Supreme Court has finally decided to hear two vitally important marriage equality cases. One looks at the Defence Of Marriage Act (which means the US federal government can currently only recognise unions between one man and one woman) and its effect on same sex partners, while the other will decide whether Prop. 8 will finally be struck down, and could bring to an end four years of legal wrangling over the issue. Although the Californian courts have decided Prop. 8 is ‘unconstitutional under the Due Process Clause because no compelling state interest justifies denying same-sex couples the fundamental right to marry’, the US Supreme Court will now have its say on the matter.

These court decisions are undoubtedly the most important so far in the battle for marriage equality in America – the Prop. 8 decision in particular could have far-reaching implications, especially as 30 other states already have amendments to their constitution specifically banning gay marriage. Whatever decision is made could well be felt across the nation, and it’s far from a forgone conclusion the court will come down in favour of same sex unions. So if you need get a bit of a fire in your belly to convince you to take up the fight, this could be just the documentary you need.

Overall Verdict: An uplifting look at how ordinary people found a cause that meant a huge amount to them and then stepped up to start grass roots efforts to effect change. With the battle for equal marriage still in full swing, it may be just what you need to inspire you to take up the fight.