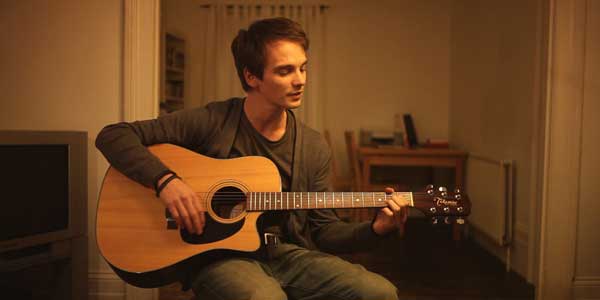 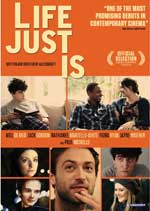 I always say a film must be doing something right if you have a reaction to it, rather than it blandly flitting across your retina. However it’s preferable if that reaction is joy or admiration, rather than a sense of irritation and a feeling that the whole thing is closer to being pretentious toss than a successful trip into the minds of a group of people in their mid-20s.

The film follows several friends who are relatively newly out of university, living in London and starting their ‘real lives’.  Pete (Jack Gordon) is yet to begin a job, and so spends his time at home, reading books and wondering about the meaning of the world. This stretches into a crisis of agnostic faith as he tries to work out whether he could ever believe in God and what that might mean. Meanwhile Tom (Nathaniel Martello-White) has feeling for one of his friends, but isn’t sure whether to do anything about it. There’s also Jay (Jayne Wisener), who’s recently started a relationship with the significantly older Bobby (Paul Nicholls), but can’t fully give herself to the relationship.

There’s probably a narrow band of people who will love this movie, which is those who are a year or two out of university, who haven’t yet grounded the airy introspection and solipsism that the freedom and intellectual aspirations of uni often engender. Those who don’t have a degree or are a few years older may end up rolling their eyes at the rather pretentious meanderings of these slightly annoying young people.

At one point the character of Bobby says he can’t fully relate to his girlfriend’s mates because they’re just ‘at that stage of their lives’, and it’s very true. However the movie never questions these young adult’s ideas further than that, and on their own they can seem rather juvenile and melodramatic. I’m not saying people in their mid-20s can’t be like they are in the movie, but to a certain extent, so what? The director has stated that he wanted to explore the interior lives of his characters, but by never really questioning those characters, it rarely gets that far under the surface. Indeed, for a film that starts out with a meta-scene talking about the fakeness and possibly psychologically damaging effects of rom-com happy endings, it rarely gets any further into the truth of human nature than those films.

Well, perhaps that’s a tiny bit unfair – but if a Hollywood rom-com always reaches for the easiest emotional answer, Life Just Is clutches the easiest intellectual answer. And indeed that’s probably the biggest problem I had with the entire film – that it feels too much like an intellectual exercise and not a movie about real people. In the commentary director Alex Barrett talks about how every choice had theory backing it up, but the issue is that it shows through glaringly in the final movie, so that it often feels like you’re watching something contrived to feel natural, rather than something that actually has a genuine sense of reality to it.

The style is equally likely to be enjoyed by some but found incredibly tedious by others, as much of the film is long shots of people sitting around talking. About half the time it works, pulling you into the characters and what they’re talking about, but the other half reminds you of the artifice of what you’re seeing. This isn’t helped by the fact the script too often simply has the characters baldly state exactly what they’re thinking and feeling (and their assertions are rarely questioned).

The film does include a gay character, but the movie doesn’t quite know what to with him. He almost seems to be there as an acknowledgement that modern young people are likely to know gay people, especially if they’ve been through uni (and to fill out the film’s quota of black, white, male, female, gay and straight characters). Beyond that it has little clue what the character is there for, so that you could completely remove David (Will De Meo) from the movie and it wouldn’t change a single thing.

Writer/director Alex Barrett certainly has talent, but I think perhaps he needs a few more years away from the world of British universities before he really reaches his peak. I say that not because his film is set in the slightly self-important world of post-graduates starting out in the real world, but because it’s a movie that’s seems encased in the British uni attitude to film studies, where the theory and academic ideas often feel like they’re imposed upon films, rather than coming from it. There’s nothing wrong with having big ideas and wanting to explore them in a movie, but here they’re so in your face – from the camera moves to the dialogue – that they become distracting and rather irritating.

But like I said, it certainly provoked a strong reaction in me, and like many movies that I almost feel infuriated by, it’s because it’s so close to being really good. There are a lot of good ideas, subjects and an interesting style trying to get out here, but rather than being allowed out to thrive, they’re enclosed in a restrictive straitjacket of things that may sound great in the aspic of theory, but pull the movie from seeming like it’s talking about anything real in practice. Just a little more self-awareness could have helped tremendously, but both the film and the characters in it are trapped by thoughts and ideas that may or may not have any basis in reality.

Overall Verdict: If you’ve just left uni, you may enjoy look at the pains and difficulties of post-university life. Everyone else will roll their eyes at both the pretentiousness of the characters and the movie itself.