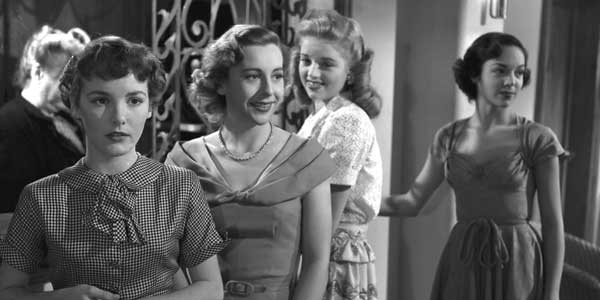 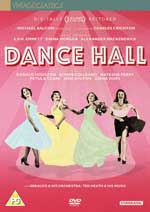 In the pantheon of Ealing films, Dance Hall is one of the ones that normally gets ignored. That’s partly because when it was released it was dismissed by male critics who looked at is as rather irrelevant, due to the fact it was about working class women. However in recent years it’s had a bit of a reappraisal, not because it’s actually an overlooked masterpiece, but because it’s one of the few movies made not long after the Second World War that does concentrate on the lives of normal women.

Perhaps even more unusually it had a female screenwriter as one of the three people who came up with the script (as revealed in the featurette,  there was little chance of a female director as the head of Ealing didn’t think women could direct – instead it’s helmed by The Lavender Hill Mob’s Charles Crichton). Viewed through 21st Century eyes, it’s not the greatest depiction of female characters ever, but in the context of the time it was made it’s definitely interesting.

The movie is about four women who work in a factory and like to spend their evenings at the Chiswick Palais dance hall, boogieing along to the music of Ted Heath’s Big Band. Eve (the excellent Natasha Parry) is married to Phil, but the cracks in their marriage appear and his jealousy emerges when she takes a different partner for an upcoming dance contest. Georgie (a young Petula Clark) meanwhile is desperate to become a dance champion with her partner, Peter.

It’s a fairly slight tale that dips a little too far into melodrama at times, but it’s a very watchable romantic drama following the ups and down of the women’s (mostly romantic) lives. Its greatest downfall is the final scene, where the bad luck that befalls Eve starts to be unintentionally funny. It could literally have been put in a film spoof without any changes.

However Dance Hall is definitely intriguing for what it – sometimes inadvertently – says about the post war battle of the sexes. The women are working in a factory and have got used to the fact they are now part of the workforce (as they had to be during the war) and make their own money, but the men aren’t used to this. Much of the problem between Eve and her hubby is due to the fact he suddenly has a wife who isn’t what he was brought up to believe married women would be – meek, mild and only unchained from the cooker in order to give birth.

That’s definitely interesting, although elsewhere it’s not so forward thinking, so that Georgie may be a grown woman but acts like she’s about 12. Indeed the movie overall is rather caught up in the sexual battle, unsure whether to treat its characters as strong, independent women who are the equals of men, or whether they’re flighty things who secretly just want a man to sweep them off their feet and onto the dance floor. To be honest it’s a battle that’s still being fought in modern rom-coms, although it’s more pronounced in Dance Hall as it’s perhaps less aware there’s a battle being fought.

Dance Hall is by no means a great film and indeed it’s often a tad silly, but for a fan of British film it holds a lot more interest than you might expect, and the disc also includes an interesting featurette that helps put it into context.

Overall Verdict: Caught between realising post war women had a new place in society and thinking of them as slightly feeble-minded swooners, Dance Hall is an intriguing movie even if it’s not a great one.