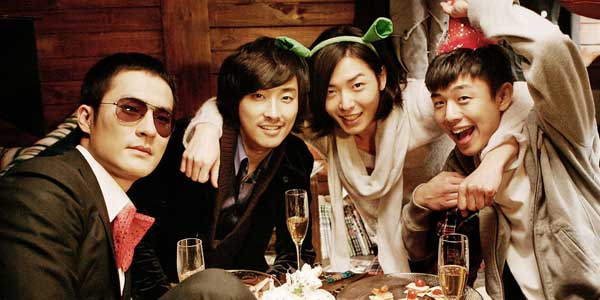 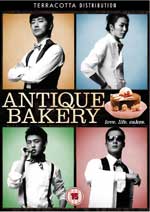 Sometimes you see a film, the popularity of which defeats you – Antique Bakery (2008) is one such movie. That’s not to say that this smash hit from Korea (based on the bestselling manga series of the same name), directed by Min Kyu-dong (Five Senses of Eros (2005) and All About My Wife (2012)), and featuring Korean stars Ju Ji-hun, Kim Jae-wook and Yu Ain, isn’t fun. It’s more that, like the cakes which are served in the bakery, there isn’t a lot of substance beneath its sugary sweet coating.

Jin-hyuk (Ju Ji-hun), the heir to his family’s fortune, is looking for direction, and love, in life. Deciding to open a high class cake shop in an old antique shop, he hopes to attract some potential girlfriends and kill two birds with one stone. His first mistake however comes when he hires Korea’s top pastry chef, Sun-woo (Kim Jae-wook), to work for him. Sun-woo has had a crush on Jin-hyuk since they were at school together, and finds it difficult to contain his passions for his new boss. After Jin-hyuk takes on two more members of staff – an ex-boxing champion called Gi-beom (YU Ain) and clueless bodyguard Su-young (CHOI Ji-ho) – temperatures begin to rise and things start getting steamy both in and out of the kitchen.

You only have yourself to blame if you expect anything of depth from a film which bases its premise around a bespoke patisserie, whose sole purpose is to attract potential partners for the four men who work there. Unfortunately the story, and hence the film as a whole, is as light as the sponge fingers that the guys concoct to entice their burgeoning clientele.

Those looking for sex with their cream cakes will, I’m afraid, be disappointed as any under the counter shenanigans are more inferred than seen – which is actually something in the film’s favour. Though to many in the wider public much of gay cinema usually revolves around one thing, Antique Bakery proves that films that fall within this oft misunderstood genre can have fun without always reverting to preconceived stereotypes.

Watching the film it wouldn’t take an expert to work out where it originates from. Everything in it – from the hyper characters to the cartoonish environment in which they live and work – smacks of the air of neon plastic frequently prevalent in pop culture from the East. The four guys at the centre of the story, in particular Jin-hyeok and Sun-woo, approach everything from their work to their (in some cases suppressed) emotions with such intensity that it’s a wonder the whole cast doesn’t implode in a fusion of candy coloured stickiness.

Sometimes however you just need a bit of escapism, which the innocuous and cinematic frippery of Antique Bakery provides in ample helpings.

Overall Verdict: A light and frothy take on the difficulties of combing love, friendship and work. Like the cakes which the central characters produce in their exclusive bakery, this film is fun while it lasts and best washed down with a glass of something bubbly.