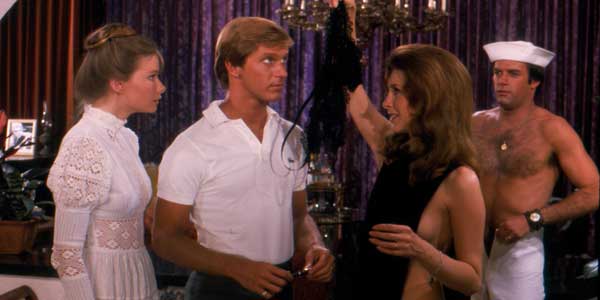 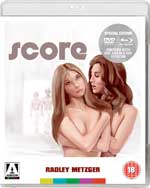 Camille 2000 is a modern take on Dumas’ La Dame Aux Camélias, about a woman with a reputation for using men for their money, but who may change when she meets Armand, who appears rich but isn’t actually all that wealthy. The Lickerish Quartet is a strange but absorbing movie about a man, a woman and her grown son. They invite a young lady to their house who they think starred in an 8mm porn loop they own. However mind games ensue, much sex is had between the woman and everyone else, and it all gets very surreal at the end. They’re both better than you’d expect from 70s erotica, and indeed Lickerish Quartet is actually a surprisingly complex, ambitious and thought provoking movie.

However there are still erotica, with lots of softcore straight sex and some lesbian action thrown in for the beady eyes of hetero men – they may find reasons for it, but when things get Sapphic it’s still essentially girl-on-girl action for guys.

But then things become a lot more interesting and surprising, especially for a gay audience. The woman who’s having sex with the telephone repairman is Elvira (Claire Wilbur), the free-spirited wife of Jack (Gerald Grant). The couple like to play games and their latest bet involves young spouses Betsy (Lynn Lowry) and Eddie (Cal Culver).

As part of a game of bisexual conquests the duo likes to play, Elvira bets Jack that she can get much closer to Betsy before midnight. It’s going to be a tough job, as Betsy is a Catholic with a convent education. However Eddie might be an easier prospect for Jack, as the younger man doesn’t seem that interested in his wife sexually and once the joints are lit up, he takes a closeted liking to his new male friend.

Some of the film has a rather Who’s Afraid Of Virginia Woolf? feel, with issues laid bare and repressed feelings erupting. Although not amazingly deep and with a voiceover that suggests this is just a silly fairytale fantasy, it has interesting characters and a proper plot that touches on real issues – not least the problem of having a hubby who’s probably gay.

The first hour of the movie also has the feeling of being foreplay. Elvira and Jack have an agenda and the audience are being teased along for the ride. Much of the movie is their slow seduction of Betsy and Eddie, who are both interested but are unsure about actually engaging in a bit of bisexual fun. Score could have all fallen apart if it had screwed up the main event, but the cross-cut lesbian and gay male sex scenes are lengthy and feel like a literal and figurative climax.

(UPDATE: We’ve had word from the distributor about the version we’re getting in the UK. They say, ‘There were two versions of the film approved by Radley, the uncut version and the ‘soft version’ – both were prepared by Radley himself. When the BBFC wouldn’t pass the uncut version, we submitted the soft version. The soft version loses the blow job scene and another tame lesbian scene. We preferred to go with a version that had been approved by Radley, rather than a botched edit with some scenes removed to get it past the BBFC.’ It’s certainly sounds more reasonable to me to have a director approved softer version than a bowdlerised cut that was essentially edited by the BBFC).

The result is some odd editing during the main sex scenes, where not only does the film seem to jump, but the music does too. Even so, for softcore 70s erotica it’s not as coy as you might expect (just don’t expect erections and blow jobs in the UK).

So while it might be a little toned from the original version, it’s still a surprisingly thoughtful, pansexual, sometimes funny and pretty sexy movie with a far franker attitude to gay sex than you might expect for 1974.

Overall Verdict: Normally when something is claimed as ‘high class erotica’, it’s rubbish softcore with a few poncey touches, but Score is a surprisingly entertaining movie with plenty of shenanigans of all sexual persuasions.