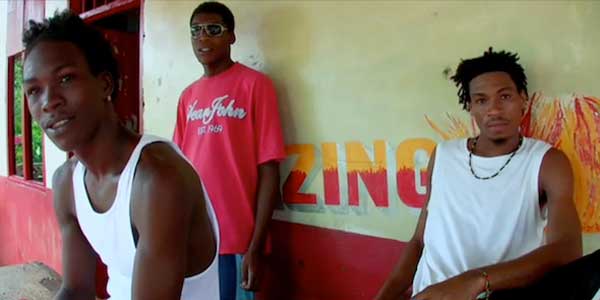 At first glance it seems that homophobia is inherent throughout Jamaican society. Whether it’s reggae song lyrics inciting hate or full-fledged public beatings, the people on this beautiful island see homophobia as an acceptable part of their culture. Selena Blake’s shocking documentary Taboo Yardies tells the story of those in fear for their lives in this paradise country.

While many people around the world are well aware of the aggressive homophobia in countries such as Uganda and Saudi Arabia, the extent of Jamaica’s problem is something that many people are unaware of. It speaks volumes about the issue that all of the gay and lesbian people interviewed in Jamaica in Taboo Yardies have had their voices distorted and faces blurred. They are too terrified to be identified. We are introduced to individuals who have faced uninhibited violence in the streets of Kingston, as well as those people who incite such violence. The sheer number of interviews here is quite unbelievable. It is no surprise Blake has been working on this project for five years!

At times it is a little overwhelming: we are presented with so many unique and complex views that it becomes difficult to tell exactly which side of the coin that particular interviewee is voicing. There are a couple of occasions where a subject’s words are used completely out of context, misrepresenting them (one human rights activist is ‘quoting’ what the general population thinks, and it could be misinterpreted as his own views, as no context is provided).

Each interview, however, is presented without bias: we are given the opportunity to make up our own minds about what each person is saying. There are never ‘cues’ from the director as to which way we should go; we are simply presented by the evidence. The film really seeks to give a balanced view of each issue. Individuals are allowed to speak their views without prejudice: we the audience get to make up our own mind about their words. The former Jamaican Prime Minister Bruce Golding’s interview is a perfect example of this: you will be outraged!

The film was clearly made on a small budget, but the technical shortcomings never hinder the story itself. It aims to be educational, as well as informative, with questions such as “Is homosexuality a choice?”. To an LGBT audience, this question is laughable, but to an audience of students in Jamaica this is essential for progress in a nation that has fallen way behind the rest of the world when it comes to human rights.

Overall verdict: Though the film sags a little under its own length, the information given and the interviews themselves never stagnate. With a clearer structure this film could have been more engaging and felt less like a learning video. Blake can be commended for putting so much effort into creating a thorough, informative film. However, it would have been good to see more focus on the stronger characters: there was a huge selection to choose from, and many could have been compelling protagonists for the story.