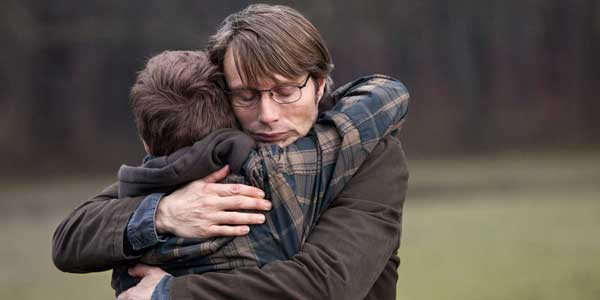 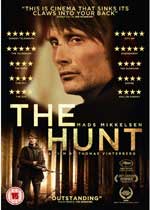 Directed by Thomas Vinterberg (Festen), the film is about Lucas (Mikkelsen), who works at a local nursery school. He’s involved in a custody fight with his son, but things look up when it appears his kid will be coming to live with him.

The bottom suddenly falls out of Lucas’ world when a child at the nursery says something that suggests Lucas may have molested her, even though the child doesn’t really know what she’s saying. The community that had once loved Lucas quickly turns their back on him, not feeling the need to wait for evidence before they vilify and ostracise him. Knowing that he hasn’t done anything wrong, he refuses to be cowed or made to feel like a paedophile, even though those around him aren’t going to give him much choice in the matter.

As many will know, Vinterberg is a former cohort of Lars Von Trier, who along with Kristian Levring, and Søren Kragh-Jacobsen founded the Dogme ’95 movement. Although not filmed under the strict rules of Dogme, the interest in naturalistic performances and social issues is still very much present, along with a slightly Von Trier-ian sense that the point being made is more important than the characters acting in a sensible way.

There’s a slight sense in The Hunt that every character is set up to be their own worst enemy, and it’s because of this that the some have found the movie slightly manipulative. The criticism isn’t wrong, but it misses the point of the film. Lucas doesn’t mount a strong defence or move away, and he insists on going to visit the parents of his accuser, while continuing to do the things he’s always done. It’s easy to argue that in the face of such serious accusation, none of these things are a great idea, but the film is trying to make a point about community and refusing to bow to social pressure when you shouldn’t have to.

The film brings to mind Henrik Ibsen’s play An Enemy Of The People with its depiction of a good man whose village turns on him. Indeed I’d be surprised if Vinterberg wasn’t thinking of Ibsen’s idea that “A minority may be right; a majority is always wrong,” when he came up with the script for The Hunt alongside Tobias Lindholm. Indeed while the details may be different, there a strong thematic link to Ibsen, not least in the pricking of liberal ideas, and how easy it can be for civilised thinking to disappear in the face of more primal self-interest.

Of course it’s also about the hysteria over paedophilia and how it can singularly inflame passions whether there’s any evidence or not. Some have also complained about this side of the movie, saying that surely no one would take a child’s word at face value, and that people wouldn’t immediately think the worst of someone they’ve known for years. However hundreds of cases around the world show that this isn’t the case, and while investigating cases on molestation has massively improved over the years, The Hunt doesn’t exaggerate how hysteria can overtake a community (just look at the South Ronaldsay child abuse scandal in the Orkneys in the early 90s, where nine children were removed from their families amidst claims of abuse and Satan worship, despite a singular lack of credible evidence).

Overall Verdict: The Hunt is a powerful, raw movie, anchored by a remarkably open, defiant performance from Mads Mikkelsen. It’s haunting, often unsettling and includes some incredibly powerful moments. If you’re a fan of European cinema or just good dramas in general, it’s well worth seeking out.