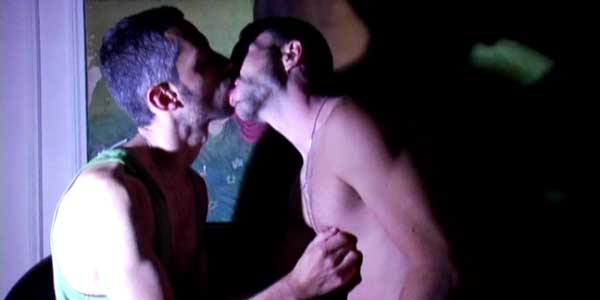 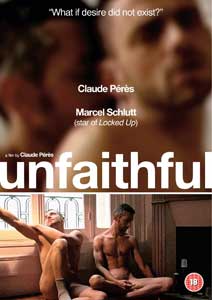 With a decidedly arty attitude, nudity, real gay sex and people talking in the type of introspective philosophical way that only French people can master (I used to think this slightly existentialist way of speaking was a French film affectation that didn’t reflect how anybody actually spoke – but then I met some middle-class Parisians and realised it’s how many of them actually are). The only thing Unfaithful is lacking is croissant and berets to make it even French-er. I don’t mean this as a criticism, but the film is undoubtedly impressively French.

The concept behind this ‘documentary’ is deceptively simple – director/star Claude Pérès has invited a man, Marcel, over to his flat. The idea is that they will have sex while Claude films it (with the resulting footage becoming Unfaithful) but there are no contracts, crew or boundaries – either is free to stop at any time. However as the film continues, the definition of what is real and what isn’t begins to blur.

Pérès shoots the entire thing himself, with the presence of the cameras being part of the film’s aesthetic – the director keeps having to move them around, ensuring we never forget we are voyeurs onto what is being shown. It also ensures we question what those on screen think about being filmed having sex, and how it might affect their actions. (BTW, you may spend some of the movie wondering why both men mainly speak heavily accented English, although it’s presumably because this is their common language as one of them is French and the other German).

Unfaithful isn’t a simple film or a particularly easy one to get into, particularly at the start, although it does reward patience. Indeed, I can imagine a lot of viewers wondering what sort of pretentious, badly made nonsense they’ve let themselves in for at the beginning. Much of the first half-hour is filmed at night with little light, including a lengthy sequence when the only thing on-screen is the out of focus glow from the guys’ cigarettes, while they chat in broken English.

While Marcel is pretty open and down-to-earth, Pérès is a rather artistic type who can’t do anything without wondering about the meaning and philosophical consequences of it – which results in a case of coitus interruptus during their night-time adventures.

Indeed it’s so keen to be ‘about’ something that it somewhat ties itself in knots. It wants to present itself as real, and yet it’s aware that it’s not real – for a start, the man Pérès has invited over is a veteran porn performer, and Unfaithful also knows that having cameras there will affect how both men react. As a result, to be ‘real’ Unfaithful has to acknowledge its artifice in a slightly ever decreasing circles way. The men talk about what it means to have sex, yet do so in a way where it’s clear they know most people don’t really talk this way while having what is essentially a one-night/morning stand. At one point the participants discuss the next ‘scene’, with Claude telling Marcel what he wants him to do, so ultimately it’s impossible to tell how much of this is real and how much it’s been scripted in advance – and indeed how much this is a comment on sex itself and how our idea of it effects the reality.

There’s a sense of this being a bit of a Russian Dolls film, attempting to explore the fakeness of trying to depict reality, and whether you can reveal the truth that’s behind reality by putting it on film. Pérès never seems to come any conclusions about this, and sometimes the film almost seems to be the explosion resulting from trying to work through these ideas and what they ultimately mean. It’s rather intriguing that the film’s stated aim – to look at whether desire exists, and that if it doesn’t whether that makes us unfaithful, is one of the least explored and least interesting aspects of the movie. Indeed it’s dealt with in such an intellectual, rarefied (rather French) way, it almost seems detached from what we’re seeing on screen.

It may have been Pérès’ starting point, but it essentially becomes an afterthought in an exploration of sex, openness, and how putting something on film alters how ‘real’ something you’re seeing is (in terms of both how it changes the way the participants acts and whether someone watching can be anything more than passive voyeur).

Sex is almost the natural medium for this – something very common and which nearly everyone has engaged in, but which is rarely explored in any depth on screen. Just the action of showing real sex – and particularly gay sex as it’s even more ‘taboo’ in films – puts the act under the microscope and asks the viewer to question the meaning behind why they’re being shown what is normally hidden.  Pérès may sometimes get a little lost in his own head as to the meaning of all the ideas his film throws up, but after the slog of the first half-hour, it’s a surprisingly thought-provoking movie.

Undoubtedly some viewers will find the whole thing to be pretentious bore, especially as it demands the viewer do quite a lot of the work and its signposts aren’t always clear (and can often come across as the movie slightly disappearing up its own ass). However even they might perk up once the shagging starts, which is often pretty sexy in its intimacy. Even the fact the static cameras mean you can’t always see exactly what’s going on adds to the voyeurism, so that it feels like something you’ve been invited to, but you’re not sure whether you ought to be there.

Overall Verdict: It may not be a film for everyone, but if you enjoy a movie that’s a bit of a challenge (and you can get through the immensely tedious first half hour), which asks you to engage with it on a metaphysical level, it’s surprisingly interesting. Oh, and there’s a fair amount of very explicit, real sex, but I’m sure you wouldn’t be interested in that.