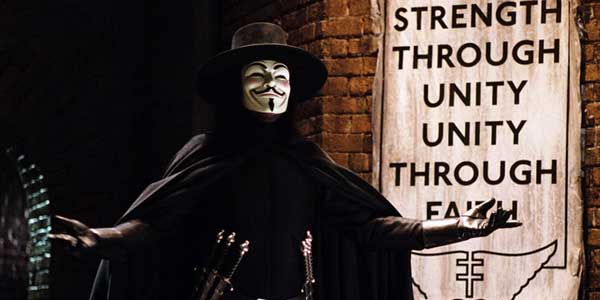 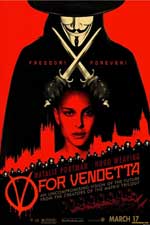 Too often, gay characters and storylines are relegated to comedies and dramas only – trying to think of a 3Dimensional LGBT character in a western, horror or sci-fi is a difficult exercise for most audiences. This does however make it all the more poignant when a character does appear outside of their heteronormative genre.

[SPOILERS AHEAD] The plot of V for Vendetta follows an articulate and genial vigilante as he navigates his way towards a revolutionary recreation of Guy Fawkes’ plot to destroy the British parliament in a dystopian future police state. Along the way he meets Evey (Natalie Portman), an admin worker at the state television network who works alongside a charismatic TV personality called Gordon (Stephen Fry). As V gains public notoriety as a ‘terrorist’, Gordon decides to publicly mock him on his TV show, which makes him an enemy of the state. V then kidnaps Evey in order to train her to help him carry out his acts of moral terrorism and lead the uprising against the totalitarian government.

The interesting subtext in this sci-fi/action narrative revolves around the characters’ sexualities, both spoken and unspoken. Gordon is tolerated at the TV network (until his subversion becomes too overt) only because of his popularity; it is revealed that he is actually a secret enemy of the state due to his homosexuality. This is explained to Evey one night as he discloses his collection of contraband religious books – another symbolic manifestation of his ‘unspoken’ desire.

Later on in the film, Evey is trained by V to withstand interrogation – however she thinks that she has been kidnapped by the state. When she is in her cell she is fed short notes supposedly written by a fellow inmate telling her life story. The messages explain how the girl grew up a lesbian before being thrown out by her family and finally captured by the fascists. This story keeps her hope up as she is incarcerated and it becomes obvious (to any audience that is willing to read it in this way) that she herself is a lesbian and is only coming to terms with it now. This is disguised for the mainstream audience as a willingness to rise up against the authorities and take responsibility against totalitarianism – but to a gay audience it is an obvious reference to coming out in a heterosexual world.