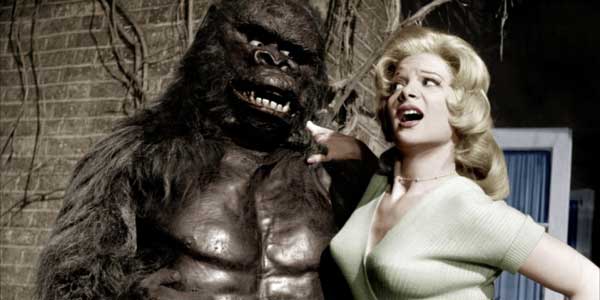 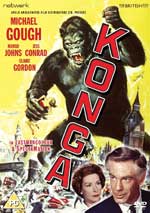 Sometimes you watch an old movie and it’s difficult not to wonder what the filmmakers thought they were producing when they made it. Konga is now seen as a b-movie cult classic of trampy camp. But when director John Lemont was making it, did he think his man in a monkey suit was good and would terrify audiences?  Did he think he was making a sci-fi thriller in the vein of King Kong that would impress people in the same way the 1933 movie did? Or even at the time did he know he was making silly nonsense that would be a guilty pleasure at best (perhaps the fact it’s called Konga suggests he did)?

Michael Gough (now best remembered as Alfred in Tim Burton’s Batman movies) plays Dr. Charles Becker, who’s been lost in Africa for a year but returns having learned some of the continent’s secrets. He believes he can manipulate genes to make plants and animals grow. After trying it on some carnivorous plants, he adapts the formula and injects a baby chimp, called Konga, which miraculously gets bigger (for some reason, a baby chimp becomes a man in a gorilla suit when it grows, but we’ll overlook that).

Becker is a full-on mad scientist, so he’s got a way to hypnotise the ape into doing whatever he tells it to – and what he wants to do is kill! First off the University Dean who doesn’t like Becker’s ideas needs to be dispatched, and then the doctor realises another scientist is on the verge of making the same discoveries. He’s also got his obsessional eye on one of his perky young students.

When the experiment goes wrong and Konga grows even bigger, the enormous ape threatens to trample all of London.

Konga is a very, very silly movie, but it’s also a bizarrely entertaining. Made on a shoestring and with special-effects that barely warrant the name, it’s all immensely daft. Thankfully though Alfred Gough manages to make things work. He takes it seriously enough that you’ll go along with it, but not so seriously that it feels like the film is trying to be anything more than ludicrous fun.

It not just the monkey suit that’s likely to raise an incredulous smile either. There’s also the fact it appears that in 1961 nobody under the age of 30 could act. There’s also young student Bob, whose family all sound like they just fell out of Downton Abbey, but he’s a cockney (maybe that was the early 60s version of talking street). Even the fact the police seem oblivious to who’s behind the murders, when it’s blindingly obvious, and that Becker is able to unleash a gorilla on London without anyone noticing is immensely silly.

It’s is unexpectedly fun though if you like a bit of b-movie silliness. With many cult classics, it’s difficult to see the appeal, but with Konga you can understand why it’s gained quite a few fans.

Overall Verdict: I think it’s fair to say this bargain basement British King Kong is no match for the original 1933 classic, but as ridiculous b-movie silliness with plenty of unintentional laughs, it’s a fun ride.