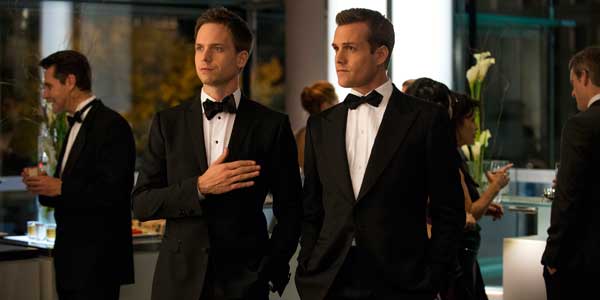 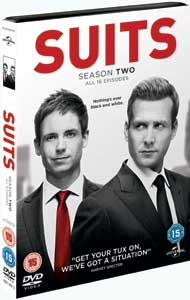 I’m finding is difficult to write a review of Suits, because much of what I want to say about it sounds like an insult, but I don’t really mean it like that.

Okay, imagine you’re one of the contestants on The Apprentice. You know, the ones who think they’re god’s gift to business and that they crap genius – and whose favourite activity is telling everyone else how brilliant they are.

What would you watch on television? Most fictional shows paint people like you as the villain. On TV you’re the oily businessman screwing the little guy. You’re the amoral lawyer who’s helping a giant corporation to steal money from orphans. Or perhaps you’re the banker who’s destroyed the world with your reckless financial dealings.

Well, Suits is the show for you. It’s here to tell us that arrogant pricks aren’t as bad as they might first seem, and that perhaps deep inside their shady dealing and money-first-people-second attitude, their souls aren’t completely black.

If you’re not an Apprentice-style tosspot, Suits is a strange form of wish-fulfilment. You may spend part of each episode wanting to slap the shit-eating grin off the main character’s faces, but it’s difficult not to be entertained and vaguely admire their no-holds-barred attitude. There’s no doubt that in real-life most of us would find these people intolerable asses, but the way it’s served up on-screen – with just enough silliness that it comes across almost like a fantasy of high-powered lawyering – it works surprisingly well.

If you’re a Suits virgin, the premise behind the series is that Mike Ross (Patrick J. Adams) is a mental prodigy who knows the entirety of the New York legal statute back-to-front and can remember pretty much everything he’s ever heard or seen. While ducking from the cops during a drug deal he accidentally ends up being interviewed at the Pearson Hardman law firm by Harvey Specter (Gabriel Macht). Harvey hires Mike, despite the fact that there’s one big hole in his résumé – he dropped out of college and isn’t legally allowed to practice law.

At the end of Season 1, it seemed that Mike’s future was under threat when law firm Senior Partner Jessica Pearson (Gina Torres) was handed information that he wasn’t really a Harvard law graduate. In Season 2 Harvey has to go to bat for his protégé in order to save his job.

Soon though Jessica’s suspicions are the least of their problems. Daniel Hardman – one of the named partners at the law firm, who was blackmailed into stepping down from the firm in order to keep his embezzling and mistresses quiet – decides to return. While he says he’s a changed man, Jessica and Harvey aren’t so sure.

Things get very personal for Harvey when rival lawyer Travis Tanner re-emerges. Having been beaten by Harvey in Season 1, Travis wants revenge. He launches a case against Harvey alleging fraud in an old case, which could completely destroy the high-flying lawyer’s career.

The 16 episodes do slightly suffer from Season 2 syndrome, which occurs when the people behind a show decide to create an ever-deepening web of internal conspiracies and conflicts. As so often happens, these things are probably more interesting for the actors and writer than the viewers. That’s largely because the series becomes increasingly centred on the things that were only tangential before, which inevitably means it threatens to lose sight of what made it work to start with. Early on it feels as if Suits – Season 2 may implode under the weight of its own macho chest-beating internal machinations. Thankfully it holds onto just enough of the entertaining legal cases and its love of doing the right thing almost by accident that it pulls through.

Indeed the second half of the season is great. Harvey and Mike may be total dicks, but they’re very entertaining dicks.

The four-disc set includes a decent set of extras including interviews and commentaries with the cast, a gag reel, some deleted scenes and a Featurette looking at ‘The Style Of Suits’.

Overall Verdict: Suits is the best show about assholes on TV. That may be a backhanded compliment but it’s true. Pretty much every character needs slapping, but they’re still fun.