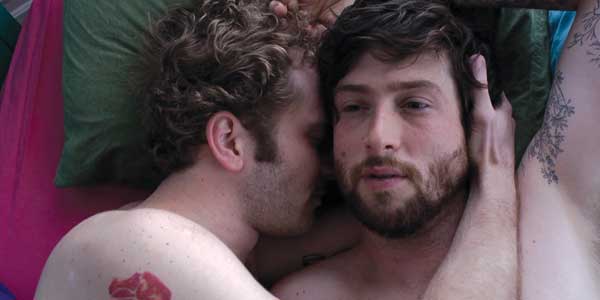 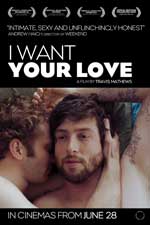 That short has now been expanded into a feature-length movie, with Travis Mathews once more at the helm and Nakedsword producing. One of the men from the short is also back, Jesse Metzger, who plays an artist in San Francisco who’s decided to move back to his Midwest home. Burdened by bills and debts, he’s realised he simply can’t afford big city life and so has to go. The film then follows his preparations to leave and the run up to a gathering of friends the night before he departs.

I Want Your Love also follows Jesse’s roommate, who is preparing to move in with his boyfriend when Jesse leaves. However there’s a tension between them as they tiptoe around this big development in their relationship.

Some will find I Want Your Love lacking in drama and incident, but others, myself included, will feel that’s its great strength. It’s an attempt to look at life as it is, without imposing too much of an artificial narrative on top of it. People wander around, talk about their problems, try to deal with all the things they haven’t said and attempt to work out what they’re doing, both from day-to-day and in the grander scheme of things. They also have a fair amount of sex, but once again, this isn’t presented in a ‘film’ or ‘porn’ way – it’s just something that happens.

Indeed one of the big things that pulls the movie together is the fact that it’s an exploration of the different roles sex plays in people’s lives. It’s about having fun and getting release, but it can also be about transgression, a way to bond and express closeness, it can allow you to try and forget your troubles for a while (for better or worse), or act as a kind of relationship lubrication, so that despite what may be happening outside the bedroom two people know they still share a core of love.

Each of the film’s sex scenes explores a different range of reasons and motivations for sex, often never explicitly stating it, but drawing the viewer’s attention in different directions as the two (or three) people come together. Mathews seems keen that while this is a film that has explicit sex as one of its main themes, it’s not a ‘sex film’. The film tries to find a sense of naturalism, with the lights turned down (literally and metaphorically), the guys looking like real people, and key developments for the characters happening during the sex, so that it always feels totally relevant.

Even so, the sex did result in the movie being banned in Australia, which many saw as being homophobic as the country has allowed films with heterosexual real sex, but drew the line at I Want Your Love. Their stated problem was they felt it presented real gay sex without narrative context, which to be honest just makes me wonder what sort of film illiterate idiots are on the Aussie Classification Board.

It may all be done in subtext, but there’s far more context here than in most films that take sex as one of their main subjects. Indeed that’s what it’s largely about, as well as being adamant that sex is a large part of life, so why should the camera have to pull away or frame things unnaturally whenever it happens?

Many will be able recognise or relate to situations in the movie, from the reasons two gay friends may end up sleeping with one another to the way sex can become part of the unspoken negotiation of a relationship. It’s a film that recognises that the sexual barriers and mores of modern gay life can be more fluid and complex than the clichés suggest.

But just like it wasn’t for the Australian Classification Board, it’s not a film for everyone. I Want Your Love isn’t packed with plot and high drama, and some will find Jesse and his friends wandering about and chatting rather dull. I also wouldn’t be shocked if those viewing it purely because they’d heard about the sex may be a little disappointed, as while incredibly explicit it’s not shot in a way designed purely to titillate the viewer (that’s not to say it can’t be sexy, but it’s certainly not traditionally pornographic). In fact, purely on sex terms, the original short is probably more overtly sexy.

It is a good film though, with Mathews bringing his strong eye for the truth of everyday gay life to the movie, which he’s honed in his ‘In Their Room’ anthology of documentary shorts, where he goes into the bedrooms of gay and bisexual men, and the participants talk about their lives (and sometimes get sexy). The actors also do a great job of showing us the issues of their characters’ lives without forcing things or getting too melodramatic. In fact, while many gay-themed films purport to look at modern gay life, I Want Your Life is one of the few that feels like it’s getting towards some sort of truth about the way many modern gay people actually live – and the place sex has in that.

As well as I Want Your Love, Travis Mathews has also been making headlines recently for collaborating with James Franco on Interior Leather Bar, which takes a more Meta look at putting gay sex on screen. It certainly suggests we should look forward to some more interesting projects from the filmmaker in the coming years.

Overall Verdict: A rare film that manages to be full of and (at least partially) about sex, but which never feels like it’s being exploitative or prurient. Instead it manages to use the sex to explore its place in modern gay life. Well worth watching if you don’t mind a film that’s more interested in naturalism and trying to find some sort of truth, than being packed with drama.

I Want Your Love is released in UK cinemas on Friday 28th June, 2013 (click here for listings), and is also available on VoD and part of the Curzon/Peccadillo ‘Queerest Tales Ever Told’ online film season.