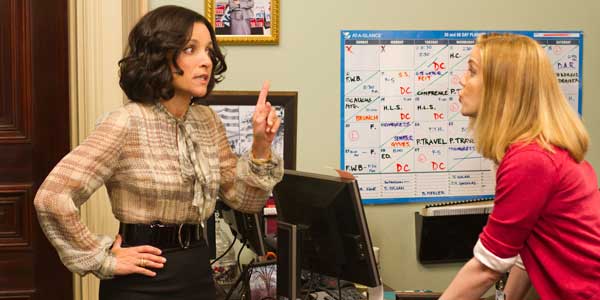 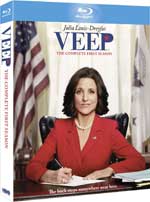 Ever since the end of Seinfeld, Hollywood has been trying to work out what to do with Julia Louis-Dreyfus. There have been a few films and some TV series, but nothing has really worked (The New Adventures of Old Christine lasted five seasons, but it didn’t show her off to her best advantage). However she may have found her a perfect fit with Veep, which is a little uneven over its first season, but still manages to be a lot of fun.

Armando Iannucci has had huge success with his brand of satire in the UK, bringing us the likes of Alan Partridge, The Day Today and The Thick Of It, and now he’s taken it to the US for Veep. He also took most of the team who made The Thick Of It, so things are truly transatlantic behind-the-scenes on the show, even if it’s looking solidly at the peculiarities of the American political system.

Louis-Dreyfus is Selina Meyer, a successful politician who came second in her party’s race for the Presidential nomination and is now installed in the Vice President’s office. However the VP is a peculiar position, where you have very little actual power, although if something happens to the Pres you’d suddenly be the most powerful person on the planet.

In order to get anything done she needs support from people in the Senate or House, and always has to be careful that nothing she does looks like it’s undermining the President. In Veep, Selina is keen to push through a Clean Jobs Initiative and work on Filibuster reform (for those not of the US persuasion, filibusters allow a small minority to try and block a bill or amendment, traditionally by giving never-ending speeches), but doing that proves tough with different interests threatening to derail any progress, and the personalities on Capitol Hill making getting anything done virtually impossible.

Selina is aided by the likes of Chief Of Staff Amy Brookheimer (Anna Chlumsky, who previously worked with Iannucci on In The Loop), her devoted aide Gary (Tony Hale) and the slightly slimy Dan (Reid Scott). They all need to be constantly on their toes as they try and manoeuvre, back-pedal, keep their boss popular and also actually try to achieve something good for the country.

As with the first season of many shows, there’s a slight sense of Veep trying to find its feet over the course of these first eight episodes. Selina’s character is a little all over the place as they figure out what works, from her seeming slightly useless and only surviving because of her staff, to being a smart, snappy politician who’s trapped in a peculiar position where you’re constantly criticised but have limited power to do anything about it. It tends to come down on the side of the latter, while also making her very human, which is probably the smartest move.

Iannucci’s satire is still present, although perhaps not quite as bitingly sharp as in his British shows (in the UK there’s more of a tendency towards painting the whole of politics as preposterous, but here there’s still respect for the office, if not necessarily the people). Despite the fact things change slightly with each episode as it works itself out, it’s still very entertaining. There’s plenty of the pace, energy, people talking over one another and a sense of things always being on the precipice of collapse that Iannucci does so well.

There are some okay special features, but you may end up wanting to throw things at the TV before you get to them. Veep follows the lead of some other HBO releases, which is to list all the special features from the whole series on each disc, which means that you click to watch something only to be told it’s on the other Blu-ray. However, if you can forgive that, there’s some decent stuff. The ‘making of…’ featurette is really interesting, showing how the transatlantic show came together.

There are also some decent deleted scenes and outtakes, along with numerous entertaining audio commentaries.

Overall Verdict: Slightly uneven but still a lot of fun, Armando Iannucci successfully transplants his political satire template to the US, with a great cast and plenty of laughs.