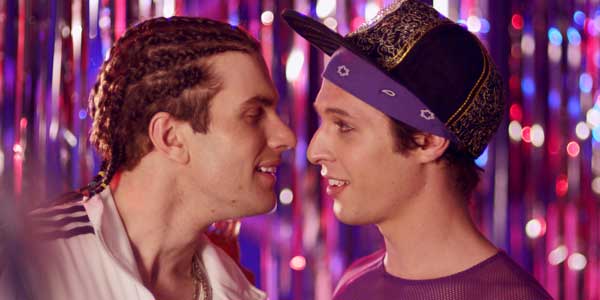 JJ has dreams of making it big in the reggae dancehall scene, although that’s not going to be easy for a white boy from Bristol. After moving to London with his boyfriend, Orlando, JJ impresses with his skills at the Urban Slam Finals, showing up the current kings of the dancehall, The Ilford Maniacs, in the process.

Not long after JJ comes out on stage, the Maniacs launch a brutal attack on Orlando, leaving him severely injured and brain damaged. After the attackers are charged with the violent assault, the trial comes down to whether they were motivated by homophobia and anger that JJ had done so well at the competition, or whether they were provoked because they heard Orlando say the word ‘nigger’.

After the attackers get light sentences, JJ is approached by the closeted lawyer who defended the criminals, who says he now believes that homophobic reggae music influences young urban men and wants to campaign agains it. JJ also wants to meet the men who left his boyfriend with a child-like mind, which the attackers initially want nothing to do with – not least because they do indeed hate gay people.

Based on Rikki Beadle-Blair’s 2003 play, the writer has both adapted the script and directs the film version. You can feel it’s a Blair piece, as it’s both very grounded in the gritty, often angry lives of young people in the inner city and yet still manages to feel like it’s taking place in a slightly heightened world where anything could happen. That’s a good thing, as there are parts of Bashment that stretch credulity, however it works because of the amplified world it’s based in.

Some may still find certain parts of it a little difficult to swallow. That’s not helped by the fact it wants to explore all sorts of ideas and areas – from homosexuality to race to gender roles to poverty. Whereas most films come to nice easy conclusions about their themes, Bashment tries to show how all these things can be interconnected and that there are at least two ways of looking at most things, which often means it’s very difficult for people to see eye-to-eye. It’s interesting and complex, but there’s a sense of the film trying to work through all these ideas and not being fully sure what they mean. The result is that it sometimes feels unclear how all these things interact, but it’s still a very interesting exploration.

This is partly a result of the movie trying to be fairly even handed. While the Ilford Maniacs aren’t absolved for their attack, Bashment is very deliberate in suggesting that being gay does not automatically trump the effects of race, poverty and urban culture, and that even between marginalised groups there can be a complete lack of understanding.

While it may be a subplot, perhaps the most successful part of the film is in the burgeoning relationship between the mixed race Karisma and one of the attackers. It offers a clear and fascinating exploration of gender and masculinity, with Karisma visiting the man in prison and challenging his ideas about what it means to be a man. After initial resistance he begins to see that there is perhaps more to him than just the person he feels the world has told him he has to be, leading to a great ending.

Bashment may not always have clear answers for everything, but by going into depth about so many ideas it certainly offers plenty of scope to get people thinking.

Overall Verdict: It’s not always an easy watch, but Bashment is an interesting one. There are admittedly certain aspects that feel a little muddied and where the low-budget begins to show around the edges, but it’s largely an interesting mix of gritty realism and heightened possibility.