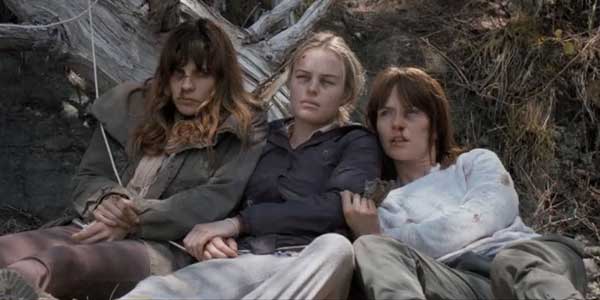 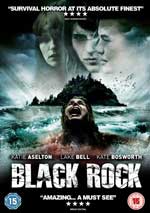 Sarah (Kate Bosworth) tricks her quarrelling friends, Abby (Katie Aselton) and Lou (Lake Bell), into heading off for a bonding weekend on Black Rock – an isolated island where they spent time when they were younger. While they believe they’ll be alone, they’re surprised when three hunters, who are not too long back from Afghanistan, stumble across them.

After getting drunk together, Abby and one of the hunters end up making out in the woods. When she turns down his attempts to have sex with her, he turns aggressive and Abby ends up hitting him over the head with a rock. Unfortunately she accidentally kills him in the process. His friends aren’t impressed by this and things quickly escalate to the point they decide they must kill the women. This sets off a cat and mouse chase, where the completely unprepared Abby, Lou and Sarah attempt to survive while being hunted by two highly trained men who want them dead.

It’s a fairly simple set up and the early scenes show promise, but as soon as the survival aspect kicks in, Black Rock just goes through the motions, never doing anything too surprising but never doing anything too dreadful either. It’s pretty much an exercise in how to get from A to Z in a survival thriller. Some people have described this as a female Deliverance, but other than a vague ‘people trying to survive being hunted in the wilderness’ theme, the movies have little in common.

There’s the possibility of a little interest being added by the fact Katie Aselton, who directed and stars in the film as well as coming up with the story, initially seems to be trying to give a bit of a feminist stamp to the movie. This certainly appears to be true early one, when the women are having to fight against men who think they should be able to take whatever they want, whenever they want. However as the film goes on, this is rather undermined, not least by a scene where the women get nude and have to press up against one another for no real reason. This may partly be due to the fact the script itself comes from Mark Duplass, who’s generally written and directed indie comedies such as Cyrus and The Puffy Chair. In those films he’s often shown an interest in the battle of the sexes, but it’s often felt like he didn’t quite know that to say about it.

Black Rock isn’t terrible, but there’s simply nothing to make it stand out. Even the twists and shocks feel rather old hat, while the tension never rises above the mediocre. Even its themes of unresolved conflict and growing older are rather thrown in and don’t really go anywhere.

Perhaps the single biggest flaw is the bad guys, who ham it up partly because the script never makes them come to life. They feel like ciphers and even the actors themselves seem unconvinced by their motivations, other Jay Paulson, who decides acting a bit unhinged might help – it doesn’t. The only one of them who feels like they might become a real character is the one who gets killed, which is a bit unfortunate.

Overall Verdict: It could be a lot worse, but despite some promise in the early scenes, Black Rock quick becomes a generic survival thriller that ticks the boxes but never really pulls you in.