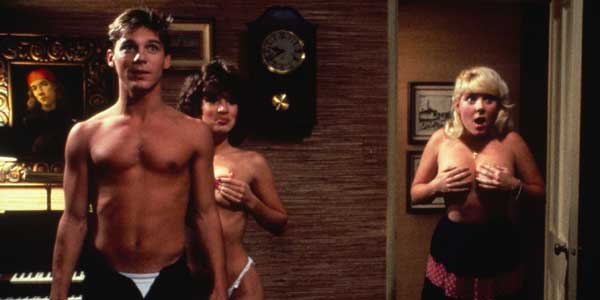 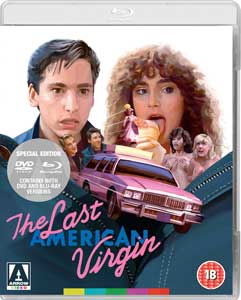 Teen films got very raunchy in the early 80s. The Last American Virgin was released shortly after Porky’s, and while it didn’t see the commercial success of that movie (and indeed isn’t quite as full-on with its sexual shenanigans), it did leave its mark on cult cinema. Indeed you have to wonder whether Adam Herz watched this before he decided to write American Pie (just leaving out the more serious bit towards the end).

Gary (Lawrence Monoson), Rick (Steve Antin) and David (Joe Rubbo) are three teenaged friends with one thing on their mind – sex. Much of their lives is based around finding situations where they might get lucky with available women, even if their initial attempts to woo a trio of young ladies turn disastrous when Gary’s parents walk in just as the main event is about to get underway. Between finding women – ranging from fellow students to a lusty cougar and a red-headed prostitute – they are determined to have as much sex as possible. Actually, at first they just want to have some sex – any sex in fact.

Then Gary meets Karen (Diane Franklin) and quickly falls for her. However before he knows it she’s gone off with the better-looking and cooler Rick, leaving Gary stumbling along behind. However, when the repercussions of sex emerge and Rick reveals his true colours, Gary may have the opportunity to show Karen how he truly feels.

The Last American Virgin is a slightly odd film. The first hour is pure teen hi-jinks and silliness, with the boys going through an episodic series of mishaps and comic disasters as they desperately try to do the dirty. The film inhabits that 80s world where women are either mothers, perfect love-interests or sex organs with a vacuous head on top. The world of film remains incredibly sexist to this day – anyone who suggests women play equal roles in modern Hollywood movies is delusional – but watching a film like this does show things have improved significantly in the past 30 years.

While there is a lot of sexism on display, there’s an odd innocence about it, as if the movie doesn’t even realise it was doing it – which to be honest in the early 80s it probably didn’t.

After the first hour, the movie takes a detour and a lot of viewers will be wondering how on Earth a film that was all about boobs and dick-measuring – literally, there’s a scene where Gary measures all his friend’s erections (covered on screen by tighty whities of course) – quickly ends up in a fairly serious and downbeat place. It’s difficult not to wonder whether this is something that would be half-expected in the 80s but now appears rather surprising, especially with the speed with which it happens.

It just about works though, ensuring that beyond the sex and silliness the movie does have a message about what sex can mean and the emotional pain that comes along with the shenanigans of young men thinking about what they can do with their penises. Many will respond to the film’s treatment of a young man dealing with the fact that it can feel difficult to compete against guys who are cooler, better-looking and who are generally seen as more of a stud. And that even if you try to be a good person and treat women well, it doesn’t always mean you’re going to win.

Many gay guys will be able to see things from both sides, as the then 24-year-old Steve Antin, who plays the studly Rick, is quite the hottie as a young man who has no trouble getting the ladies but who has little interest in them as people. Many will know the feeling of being attracted to pretty guys like him, even while knowing that as a person he’s a bit of a dick.

While Antin is a very heterosexual stud here, in real life he’s gay and in the mid-80s dated music mogul David Geffen (the ‘G’ in Dreamworks SKG). While his acting career never really went too far after early highs such as Last American Virgin and playing bad boy Troy in The Goonies, in recent years he’s returned as a director, such as helming the Christina Aguilera and Cher camp-fest that was Burlesque.

The Blu-ray is pretty good, with a picture quality that’s surprisingly sharp for a cult movie from the early 80s, with a decent colour palette and not too much grain. There are also some interesting extras, with interviews featuring actors Lawrence Monoson and Diane Franklin, director Boaz Davidson and cinematographer Adam Greenberg. As each of them is between 20 and 30 minutes long and filled with interesting info about both Last American Virgin and working in early-80s cinemas, they’re worth a look.

Boaz Davidson is particularly interesting, talking about how he started out making small movies in Israel before deciding to make something more personal in 1978 called Lemon Popsicle. That film was set in the 1950s and was based on Davidson’s experience growing up in Tel Aviv, when he and his young friend were trying to get close to the ladies. The Last American Virgin is a remake of that film, although set in 80s American rather than 50s Israel. The do-over was designed as the first of a series of ‘Last American…’ movies, although this ended up being the only one that made it to the screen.

Overall Verdict: A very 1980s teen sex comedy hi-jinks take a surprising and yet effective serious turn towards the end. It’s fun and even occasionally a little moving, although this cult flick’s attitude towards women could do with a lot of work.